Electric car manufacturer Fisker, which has been wracked by production delays and quality issues forcing recalls, has now lost its rock-star automotive designer, co-founder, and chairman whose name adorns the company, Henrik Fisker. 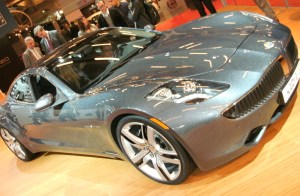 The car maker has received over $500 million dollars in government funding and and has raised multiple additional hundreds of millions of dollars in at least three funding rounds, but it has not come close to approaching Tesla’s degree of success with electric vehicles in spite of creating perhaps the most beautiful alternative energy vehicle available, the Fisker Karma.

According to Forbes, the Department of Energy has frozen a green-energy loan recently, and, in financial straits, Fisker had considered selling a majority stake to Chinese manufacturer Geely Automotive.

The auto manufacturer has only delivered 1500 vehicles to date, while rival Tesla will ship 20,000 cars this year alone.