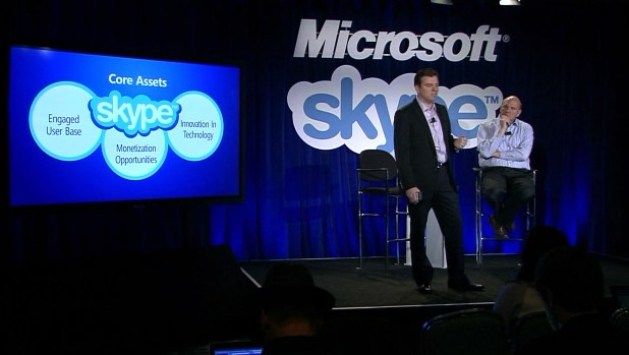 In a hastily put together press conference this morning with Microsoft CEO Steve Ballmer, Skype CEO Tony Bates said the video chat company now has the potential to reach billions of users as a result of Microsoft’s $8.5 billion acquisition.

Skype has 170 million users at the moment, and Microsoft said this morning that it aims to bring the video chat service to the Xbox 360 and Kinect, Windows Phone, and Microsoft’s Office software. Given the reach that Microsoft’s products have, it doesn’t seem too far-fetched that it could ultimately help Skype reach billions of users — although it will certainly take some time for that to happen.

Ballmer went on to discuss why Microsoft chose to acquire Skype. “Skype is part of Microsoft’s plan to empower people with new technologies that will bring them closer together,” he said. He also pointed out that Skype is pretty much synonymous with web voice and video chat — Skype has achieved the brand ideal of becoming a verb.

Bates said that the key assets of Skype are its heavily engaged user base, possibilities for monetization, and technology innovations. He also pointed out that Skype sits at the intersection of major social, mobile and video Internet trends. Undoubtedly, there seems to be lots of potential for the Skype/Microsoft union, and the acquisition puts Microsoft right at the center of some burgeoning trends.

When asked if Skype’s support for other platforms will change at all, Ballmer said, “We want to reach people whether they’re using our devices or not.” He also said that Microsoft is “moving forward” in enterprise teleconferencing, something that’s currently being dominated by Cisco’s expensive devices.