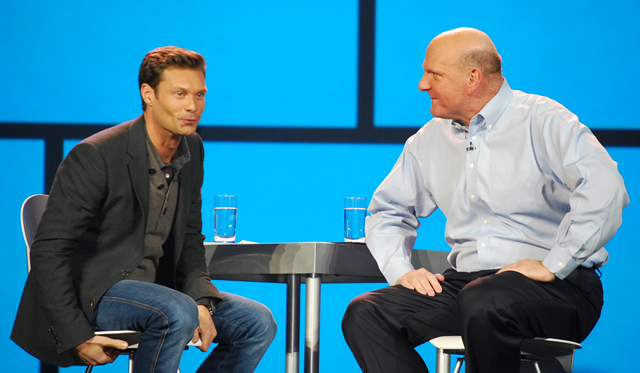 The software uses Microsoft’s Metro user interface from the Windows Phone platform, and it brings Windows up to date for the era of apps, touchscreens, and pretty new user interfaces. In that sense, Ballmer believes it will fend off competition from rivals such as Google’s Android and Apple’s iOS operating system.

“Nothing better than good competition,” Ballmer said. “Great thing, and I’m glad we’ve got Windows. Windows has been phenomenal. … Of course, things change. It’s a constant. People don’t want to compromise on what they already have.”

The keynote is the last that Microsoft will hold at CES for the foreseeable future. Microsoft announced in December that, in agreement with the Consumer Electronics Association, 2012 would be the last year for a Microsoft executive to do the opening CES keynote. For 15 years, Microsoft has had that slot, but now it will give that up. Gary Shapiro, chief executive of the CEA, said in his opening remarks he would be shocked if Microsoft did not return to the opening keynote stage in the years ahead, and he expressed his “gratitude and goodwill” to Microsoft. He added, “Change is the only constant in technology.” 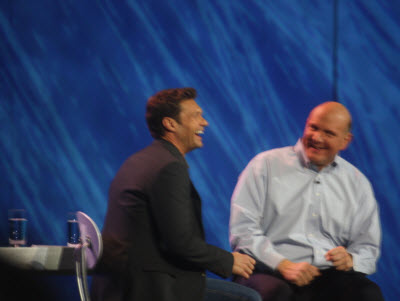 Radio personality and TV host Ryan Seacrest came out on stage to lend his celebrity cachet to the occasion. Ballmer and Seacrest talked about Windows Phone and its Metro user interface at the outset of the keynote.

Microsoft showed a video of new Ultrabook laptops such as HP’s Envy 14 Spectre machine, all of them taking advantage of Windows. Microsoft says Windows 8 will deliver the “potential of the tablet and the power of the PC.” Microsoft also highlighted a Samsung Series 9 Ultrabook that is just 13 millimeters thick.

You can personalize the locked opening screen and the initial user interface of the machine so that your most pressing and relevant information is presented to you at the outset. There are tiles that are windows into your apps, showing you what is happening with those apps without you having to open them. You may, for instance, see that you have 10 pending messages to view on Facebook.

You can swipe the touchscreen from the side to get quick access to “charms,” or navigation points to the Start menu or other screens.

Windows 8 will run on both ARM and the Intel-dominated x86 architectures. Texas Instruments, Nvidia and Qualcomm are creating ARM-based chips for Windows 8. Microsoft showed a Windows 8 tablet running on an Nvidia Tegra 3 chip.

The Metro interface includes a Windows Store where you can see high-profile promotions of items for sale in the store. You can see which ones are free and the reviews in terms of stars, as rated by users.

With Metro, you can gather a bunch of apps and other software in a single place, say all the software you want your kids to be able to access easily, and give it a definition, such as “kids”. If you have a recipe open on a web page, you can swipe on the side of the screen, hit share, and then send it off to someone. You can thus share the recipe without leaving the app or web page. You can also compare two recipes from different apps and look at them both at the same time.

The familiar Windows interface is just a click away. In late February, Microsoft will release a beta test of Windows 8, and it expects to launch it later this year.