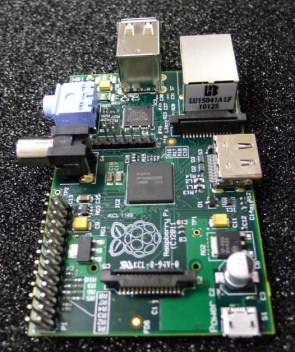 You might want to hold back on that $600 Mac Mini purchase for just a little bit longer. The Raspberry Pi, the little $25 computer that can run Quake 3 Arena and play HD videos, is scheduled to go into volume production in January. If you want to splurge, you can also pay a $10 premium for the fancy Model B that comes with an ethernet port and 256 – instead of 128 – MByte RAM.

In a new blog post, the developers report that the first finished circuit boards have arrived. “They’re undergoing electrical testing alongside hardware and software testing at the moment, and if all goes well, the Raspberry Pi you’ll be buying in January (or by auction later this month if they all work as they should) will be exactly like one of these.”, says Raspberry Pi blog editor Liz Upton.

The Raspberry Pi has grown in size since the last time we reported on it. An early prototype resembled a USB flash drive, but the new board is about as wide as two credit cards side by side. The Linux operating system runs from a SD card  The computer also has a USB-out port that lets owners plug in a keyboard, and an HDMI-out port that can connect to an HDMI-enabled television or monitor.

The $25 computer looks as bare bones as it gets, but its ARM11 CPU operating at 700 MHz seems quite capable of playing 1080p HD video.

The Raspberry Pi is the brainchild of engineer Eben Upton and British programmer David Braben, who co-created the pioneering 3D open-world game Elite. Their goal is to manufacture a computer that is so inexpensive that every student can be given one. Braben himself got started on computers as a student. His Elite game was created on Acorn’s BBC Micro, the most common computer at British schools in the mid-1980s. Braben is also the founder of Frontier Developments, the studio that created the virtual animal simulation Kinectimals for Microsoft.