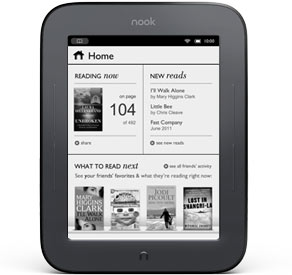 Just a month after releasing a major update to the Nook Color, Barnes & Noble announced today a smaller, more simplified version of the original black-and-white Nook. At $139, the device will compete better with the Amazon Kindle, which retails for the same price with its Wi-Fi only version, and the just-released $129 touch-enabled Kobo e-reader.

Like the latest Kindle, the new Nook has a 6-inch E Ink Pearl display, but that’s where the similarities stop. The new black-and-white Nook is setting itself apart by removing the physical keyboard to make the device smaller and it claims a staggering two months of battery life on a single charge against Kindle’s one month of battery life.

Another big change is the move to a touch-enabled screen, which makes it possible to eliminate the physical keyboard in place of a digital one. The new Nook will use an infared ring around the screen to detect finger input rather than using a capacitive touchscreen. B&N says the new screen has “80 percent less flashing” during page turns as well.

Other specs include a weight of 7.5 ounces, 2GB of onboard storage, a microSD slot that can add up to 32GB more space, Wi-Fi connectivity, and an 800MHz TI OMAP3 processor. Notably, the device is Wi-Fi only and no 3G-enabled version will be available. The device will operate using Android 2.1, but will not support apps.

It will also support Nook Friends (which lets you connect socially with friends over Facebook, Twitter, and e-mail) and an in-store reading program that lets you preview books at B&N locations. And soon, B&N will launch myNook.com, an online portal for shopping and connecting with friends from any computer.

The new Nook can be pre-ordered online and in-stores right now. It will be sold in-store at Barnes & Noble, Walmart, and Staples and will ship on or around June 10. The original Wi-Fi and 3G versions of the Nook will have their price lowered to $119 and $169 until supplies run out.

During today’s launch presentation, Barnes & Noble CEO William Lynch claimed the company had captured over 25 percent of the e-book market since releasing the first Nook 22 months ago. Another eye-catching number was the Nook ecosystem now has over 2 million e-books with more than 50,000 publishers pushing out content.

The new Nook will help better position B&N with two competitive products. The Nook Color will act as as the company’s do-everything color tablet with apps, games, and more and it can compete well with the Apple iPad with its $249 price tag. Meanwhile, the new black-and-white Nook acts as B&N’s simple, book-focused offering that can put up a decent fight against the Kindle and Kobo.

With today’s announcement, we certainly look forward to seeing how Amazon responds to this new value-focused offering.