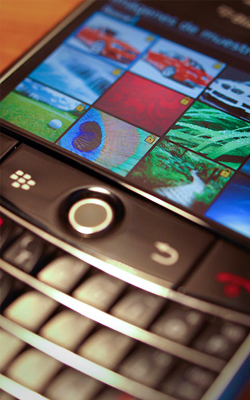 The new OS will appear on BlackBerry smartphones and tablets. The company said in a statement that BBX “combines the best of BlackBerry and the best of [real-time OS and middleware] QNX and is designed from the ground up to enable the powerful real-time mobile experiences that distinguish BlackBerry products and services.”

The new OS’s launch may quash some of the rumors that RIM was ready to hedge its bets by investing in Android for the long term.

Overall, the BlackBerry operating system has been losing momentum for some time. This summer, Apple’s iOS passed BlackBerry in popularity according to usage stats from comScore.

The BBX platform will include the new operating system as well as support for BlackBerry cloud services. BBX also brings new development environments for both HTML5 and native BlackBerry app developers.

RIM also announced today that the new operating system will include the BlackBerry Cascades UI Framework, a new way to create advanced graphics and, as a company spokesperson wrote, “bring ‘Super App’ capabilities to enable … deep integration between apps, always-on Push services, the BBM Social Platform and much more.”

Cascades puts a focus on graphically intense user interfaces, including animations and 3D graphics. Custom layouts and effects are also part of the feature set.

In addition to BBX, RIM announced today new features for BlackBerry WebWorks, which supports apps built on HTML5, CSS and JavaScript. BlackBerry WebWorks SDK 2.2 is the latest release. It’s intended for both smartphones and tablets. The SDK is available now and includes updates for the new PlayBook OS SDK, PlayBook Simulator and more.