Apple’s biggest potential acquisition ever is also its most confusing.

News broke yesterday that Apple was nearing a $3.2 billion purchase of Beats Electronics, the music streaming and flashy headphone company. The Financial Times initially reported the move, with other news organizations, including Bloomberg and the Wall Street Journal, corroborating the report — a good sign that a deal may actually be in the works.

If true, the deal would be significantly larger than Apple’s $429 million Next Computer acquisition from 1996, the company’s biggest deal so far (which also brought Steve Jobs back to Apple).

The size of the deal, combined with Beats’ questionable technology (its headphones are often criticized for being overpriced and bass-heavy), led to a wave of confusion yesterday among technology watchers. Even Daring Fireball’s John Gruber, Apple’s most eloquent and loyal fan, admits he doesn’t get why Apple would want Beats.

So what’s going on? Let’s explore:

A plunge into the premium headphone business

After the release of the first iPod, Apple’s iconic white earbuds quickly became a symbol of the company’s media dominance. The only problem? They sounded awful.

Apple attempted to solve that problem in 2008 with its more expensive in-ear headphones, but those were always an optional purchase. It wasn’t until the launch of the iPhone 5 in 2012 that Apple replaced its crummy white earbuds with the EarPods, an oddly-shaped headphone that delivered marginally better sound (personally, I never got them to fit in my ears).

I’ve always found it strange that a company as hip and quality-obsessed as Apple seemed to pay very little attention to its headphones. Beats could help Apple create a better basic headphone, as well as give it an inroad into the lucrative premium headphone market.

Apple could help Beats hone its technology to address criticisms of its current headphones. I’m not a fan of the boomy sound Beats’ gear leans towards, especially when headphones from other premium headphone companies like Shure and Klipsch often cost less.

Premium headphones are a potentially big market for Apple, even if it’s a market the company has ignored so far. Private equity firm Carlyle Groupe, which invested $500 million in Beats, said the company earned around $1.2 billion in revenue last year — mostly from the sale of headphones.

After dominating music downloads for more than a decade, Apple is now at risk of losing its audience to a plethora of streaming music services. iTunes Radio, which launched last year, offers Pandora-like streaming music, but not the sort of extensive on-demand music that Spotify and Rdio have popularized. (iTunes Radio also has a surprisingly limited library, and it rarely plays music I actually want to hear.)

Rather than building its own solution from scratch, buying Beats would give Apple immediate access to the fledgling Beats Music streaming service. Not only would that give Apple Spotify-like streaming, Beats Music attempts to differentiate itself from the competition with better music discovery features and curated content from celebrities.

Beats Music currently costs $10 a month, and it doesn’t have a free tier like Spotify. Beats has also partnered with AT&T for family music streaming plans, which cover five people in a family for $15 a month.

For the most part, Apple would be buying Beats’ streaming audio technology (which is powered by its 2012 MOG acquisition) — although all of the licensing deals Beats struck with record labels would likely have to be reworked if Apple buys it.

Beats’ streaming service would likely be a longer play for Apple than its headphone business. Beats only has a few hundred thousand subscribers at this point, while Spotify now has more than 24 million active users (6 million of which are premium subscribers). Its easy to imagine that subscriber gulf being matched if Apple were to make Beats Music free (perhaps in a limited fashion) for iOS users. 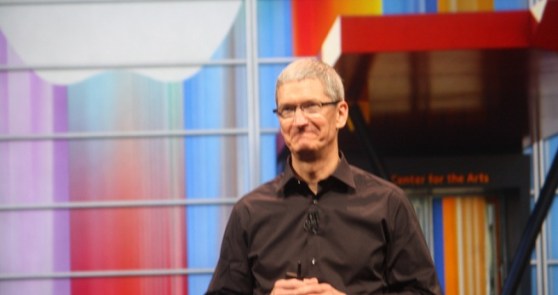 Above: Apple CEO Tim Cook at the iPhone 5 event

Even with his stone-washed dad jeans and New Balance sneakers, Steve Jobs had a sense of what was cool. That insight was essential to the development of the iPod, iTunes, and the iPhone.

While Tim Cook has proven he’s more than capable of running Apple’s business, he comes across as far more straight-laced than Jobs. He’s the perfect operations man, but judging from what we’ve seen so far, Cook isn’t exactly the arbiter of cool.

Buying Beats would give Apple access to a wildly popular brand with music industry giants at the helm (rapper Dr. Dre is a cofounder alongside music producer Jimmy Iovine, who also serves as CEO). Beats would not only help Apple stay in touch with what’s cool in music, it would also give Apple another way to appeal to younger audiences tempted away by cheap Android phones.

Apple has reportedly had issues working out streaming music licensing with record labels — having Iovine and Dr. Dre aboard would likely make that process easier.

Beats is also cool enough at this point that Apple probably wouldn’t even want to replace its branding if an acquisition occurred.

Apple typically focuses on smaller, lesser-known acquisition targets that it can easily fold into its services. At $3.2 billion, Beats would be Apple’s biggest acquisition yet, both in terms of size and consumer recognition.

With Facebook, Google, and Yahoo spending billions on their most recent acquisitions, it makes sense for Apple to up its game. Otherwise, it wouldn’t be able to compete effectively.

Apple can certainly afford to spend big bucks on acquisitions. It currently has around $151 billion in cash, and as venture capitalist Marc Andreessen points out, it makes around $1 billion a week. At its current rate, Apple could pay off a Beats acquisition in three weeks.

If the Beats acquisition actually happens, I suspect Apple will have plenty more big ticket deals down the line.