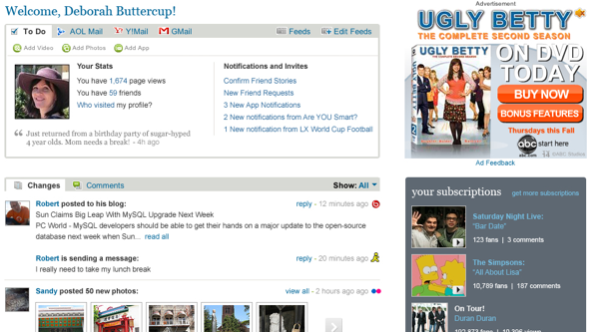 Bebo is launching a big upgrade to its user homepage. The social network is integrating ways to read email and see what friends are doing on other sites in one place. It’s the AOL-owned company’s take on a web trend called “lifestreaming.”

At this point, there’s a wide range of competitors offering lifestreaming services and cross-site integration, from social network Facebook to leading lifestreaming company Friendfeed. Perhaps this redesign will give Bebo a boost. With its 90-some million monthly users — only around six million of which are in the U.S., according to comScore — it trails Facebook and MySpace. Most of its users are in the U.K.

Bebo built its lifestreaming service using technology from SocialThing, a startup that AOL bought earlier this year. Right now, you can provide Bebo your username for sites like Twitter and Flickr and start having those updates show up in your friends’ Bebo homepages; there’s also integration with AIM chat. Feeds can be arranged in chronological order or by friend. The email feature lets you sign in and view your email in Yahoo Mail, Gmail, AOL and AIM Mail. There’s also a “Media Favorites” section that uses existing Bebo technology to show you what your friends are watching; it includes professional programming from more than 500 media companies, including MTV, CBS and the BBC.

The new homepage is called the “Social Inbox” and it’s apparently just the start of Bebo’s efforts. It “includes offering AOL’s various social-networking tools — such as chat rooms, news feeds and instant messaging — to be easily embedded by any Web site,” according to Kara Swisher at AllThingsD. “The service will be called ‘Site Social,’ with plans to use AOL’s advertising platform to help monetize the offering.” Another new feature will be a timeline of you and your friends’ activities, Swisher hears.

AOL bought Bebo for an eyebrow-raising $850 million earlier this year — far more money than the company has been bringing in. Even if Bebo gains users from the redesign, it still needs to figure out how to make enough money to justify its price, a problem it shares with every other social network.