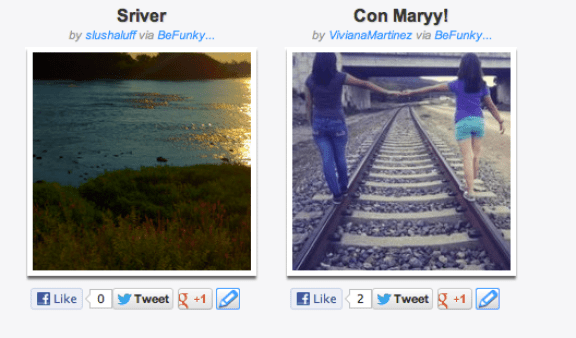 BeFunky, a free app that can best be described as Instagram-meets-Photoshop, lets you do some seriously funky stuff with your photos. Today, it launches its Instagram competitor to the U.S. market: a free photo-editing tool for Android and iOs.

Tekin Tatar, the company’s founder and CEO, said that BeFunky competes with established apps like Hipstamatic and Instagram, but it’s unique due to its “advanced smart enhancement and photo correction algorithms.”

Instagram have may its filters, but the Turkish startup is best known for its special effects. On BeFunky, users can choose from a variety of artsy frames, borders, and top it off with a retro finish. After playing around with the iPhone version, my favorites are “Old Photo” and “Gritty HDR.” Unlike Instagram, users can make subtle or extreme variations to brightness, hues, and tones (which explains how I was able to manufacture green-tinted hair).

Once you’ve added a touch of grunge or Hollywood glamour and you’re ready to share, the app integrates with the usual suspects: Facebook, Flickr, Tumblr and Twitter. You can also upload to BeFunky’s website. Also launching today is the BeFunky Gallery, which pits the site against Flickr. It’s a database of thousands of edited photos (most are head shots, but some are bordering on artistic) that you can comment on, rate, or share.

BeFunky isn’t a new kid on the block that saw an opportunity when Instagram raked in the big bucks. It has been around since 2007, and it has succeeded in raising a total of $1.6 million in funding from Golden Horn Ventures, among others.

The startup first appeared on the scene when it launched a flagship tool to give your photos a cartoon effect, which soared on the website. It achieved millions of downloads yet again with “Uvatar,” which lets you create a virtual avatar from any photo.

With its latest update, the founders hope the photo-editing tool will make headway in the U.S. market. For this reason, the small team relocated the company’s headquarters from Turkey to San Francisco.

Tatar told me that the startup has soared to 5 million active monthly users and 500,000 daily users that create 50 million photos each month. The lesson here is that if you’re an app developer with a goal to reach millions of downloads, why not give photo-editing a shot?