Amid widespread paranoia about security concerns surrounding China’s tech giants, the city of Beijing is now challenging the U.S. for global tech dominance.

A new report from CB Insights shows just how rapidly Beijing is gaining on Silicon Valley, a region that has long been recognized as the epicenter of the tech innovation economy. According to the report on global tech hubs, Silicon Valley is still dominant, for the moment, with a big lead in the number of funding rounds.

But all that is shifting: “Beijing and Shanghai are poised to be the tech hubs of the future,” the report says. “They lead among high-growth hubs for unicorns, mega-rounds, and large exits. Company creation is accelerating.”

The report cites a couple of reasons it believes Beijing, and to a lesser extent, Shanghai, could surpass Silicon Valley in the coming years.

The first is the mega-exits the region is seeing: “Outsized returns help funnel new capital into an ecosystem, as investors don’t want to miss out on the next big exit. JD.com and Alibaba were among the largest exits globally in the period studied and will fuel more resources and talent,” the report says.

The report also notes that since 2012, Beijing has had 30 exits worth more than $100 million, including JD.com, whose IPO was valued at about $26 billion. Shanghai had 20 exits valued over $100 million.

A second factor: Beijing and other Asian tech hubs are benefitting from Softbank’s checkbook: “The Japanese tech holding company’s portfolio includes more than 65 companies in our Asian hubs, showing how a single investor has propelled the rise of tech in Asia, particularly China and South Korea,” the report says.

For the moment, Silicon Valley still leads the world, with 57 unicorns, while Beijing has 29 and Shanghai has 11. But in the first quarter of 2018, Shanghai and Beijing combined welcomed 3 new unicorns, the same number as Silicon Valley.

And while Beijing and Shanghai lag behind Silicon Valley in terms of the number of venture capital deals, the latter has seen a slight dip in number of deals over the past two years. Meanwhile, the growth rate for Beijing and Shanghai venture deals is ramping up. This startup frenzy is seen even more clearly in the rapidly increasing number of first-time deals for new startups: 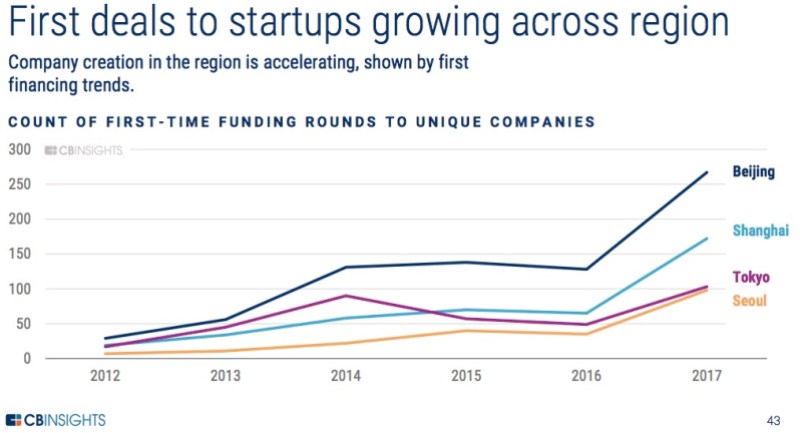 While the report doesn’t touch on this directly, China’s government is also playing a huge role in this surge. The country is making a tremendous effort to claim global leadership in areas like artificial intelligence, while also taking steps to encourage the introduction of technologies like 5G wireless networks and autonomous vehicles.

Naturally, those efforts have been met with stiff resistance by the U.S. government, which believes Chinese products pose potential security threats, due to the cozy relationship between tech companies and the Chinese government. But U.S. entrepreneurs, developers, and VCs may face difficult decisions in the coming years as they seek to plant new flags in a rapidly shifting ground zero.