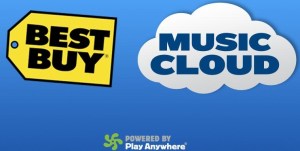 Electronics retailer Best Buy announced the launch of its own cloud-based music service for the U.S. today, dubbed Music Cloud. The new service will let users register and stream their music libraries for on-the-go listening through iOS, Android, and BlackBerry devices.

Though the service got some subtle marketing last week (and is already running in the UK), today’s announcement throws the tarp off of a modest demo and an ambitious strategy for the U.S. market. According to Music Cloud’s landing page, the service monitors users’ music libraries through a downloadable desktop app. Once the service has crawled a library, it gives the thumbs up to start to sharing music with other devices. Offline playback is covered too thanks to the Catch Media-supplied “Play Anywhere” service running under the hood.

However, the devil is very much in the details.

The service is only compatible with iTunes music libraries, and Best Buy has been hazy on pricing. Paired with its reliance on an always-on desktop app, Music Cloud is likely to see stiff competition in a marketplace already inhabited by lither options from Apple (iCloud), Amazon (Cloud Drive), and Google (Google Music). Though Best Buy is historically fearless when it comes to disrupting an industry (remember its digital movie rental service?), it’s hard to deny that the deck is stacked against the retailer when it comes to cloud services. The tight vertical integration of iCloud, along with Google and Amazon’s minted reputations as being cloud-savvy begs the inevitable question for potential users: “Why bother?”

The service is currently offered through Best Buy’s site on a demo-only basis, granting 30 seconds of audio playback per track. The forthcoming official launch will reportedly offer additional storage and playback options for a nominal fee.