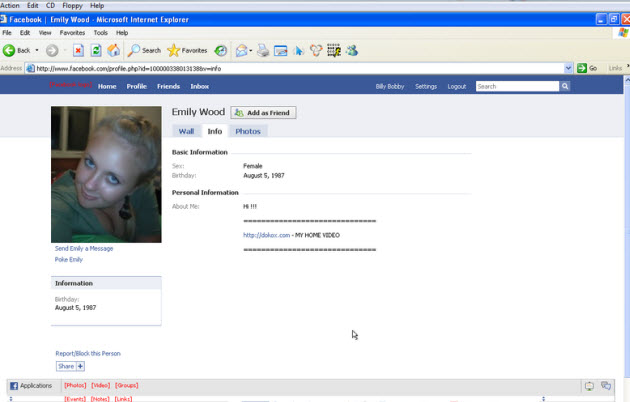 A new kind of cyberattack was discovered today, created by hackers who are automatically generating new Facebook profiles.

The attacks were discovered by security expert Roger Thompson at AVG. He noticed his LinkScanner security products were detecting rogue spyware attacks that seemed to be originating from Facebook.

The attackers were replicating Facebook profiles, one after another, with similar user data. The fake Facebook user pages have video links on them that lead you to malware.

Thompson said he was seeing a lot of these attacks, all from different profiles but the same picture and link. The data thieves in this case seem to have found a way to automate the creation of Facebook accounts, which means they can get around the Facebook Capcha, where you have to prove you are human by recognizing handwritten letters and typing them into a response box.

In a statement, a Facebook spokesperson said, “We’re working to identify the handful of fake accounts that were created and disable them.  The URL contained in the profiles has already been blacklisted by the major web browsers and blocked from being shared on Facebook.  We use an outside captcha company called reCAPTCHA (http://recaptcha.net), which was recently acquired by Google and is a very well-regarded captcha provider.

“Based on our investigation and the relatively small number of accounts created, we’re almost certain that they were created manually, rather than by a bot.  We think this actually validates the captchas we use, as well as the various other automated security systems we’ve implemented, which severely limited the scope of this attack and enabled us to get all evidence of it off the site before people were actually harmed.”