For the first time, Google owner Alphabet (GOOG) has shared the numbers behind its various moonshots and side businesses.

It’s not surprising that financially, the Other Bets section is not doing so well. But Alphabet can certainly afford it: In 2015, Google generated $74.5 billion and saw $23.4 billion in operating income. 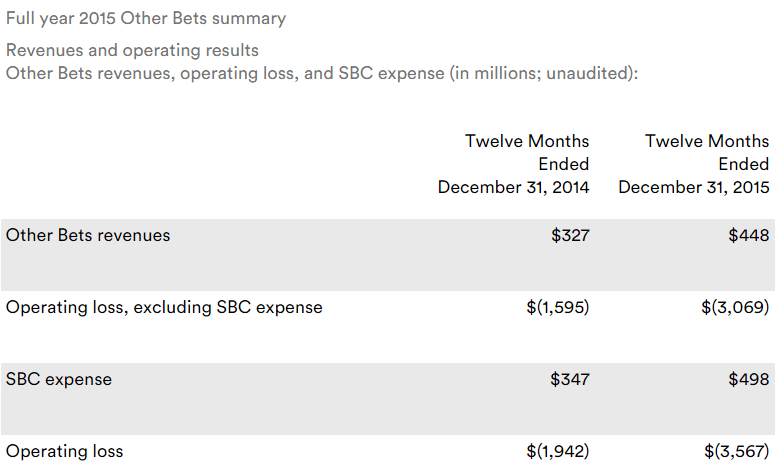 “Our very strong revenue growth in Q4 reflects the vibrancy of our business, driven by mobile search as well as YouTube and programmatic advertising, all areas in which we’ve been investing for many years,” Alphabet CFO Ruth Porat said in a statement. “We’re excited about the opportunities we have across Google and Other Bets to use technology to improve the lives of billions of people.”

Although this is the first time we’re seeing these figures, Alphabet is still leaving us with more questions than answers. While the Other Bets breakout is interesting, as it shows how much Alphabet is investing in its crazy research projects, we still have no idea how much the individual projects (self-driving cars, Internet balloons, anti-aging labs) cost to run, nor whether even one of them is profitable (unlikely). We also don’t know, for example, whether Nest sales were hurt by recent software and security setbacks.

But Other Bets aside, what investors really want to know is the details of what is in the Google section. Details for divisions like Android, Cloud, and YouTube would all be very valuable.

In short, Alphabet’s financials, despite the reorganization, remain opaque.