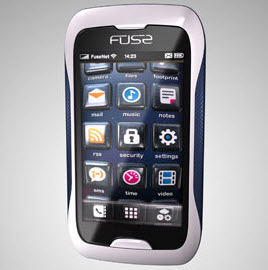 The Santa Clara, Calif.-based company makes chips and modules used for all sorts of sensors, from mouse touchpads to touchscreens on phones. The new technology gives a cell phone “multi-modal” interfaces, or lots of ways to detect a user’s intentions.

It has grip and capacitive sensing, which detects whether you are holding or squeezing the device, with sensors on both sides of the phone. You can use these senors to execute controls such as pan and scroll with a single hand. The whole idea is to simplify the use of complicated smartphones, which are much like computers now.

Since Synaptics sells its technology across the mobile phone industry, these new options should result in all sorts of new designs in the coming months.

Fuse is a result of collaboration between Synaptics and four partners: TheAlloy, The Astonishing Tribe (TAT), Immersion, and Texas Instruments. TheAlloy led the user experience and overall product design efforts. TAT enabled the effective 3-D environment and helped with the user interface. Immersion made possible the tactile feedback. TI’s OMAP 3630 processor provided the processing platform to handle things like graphics and imaging features. Synaptics, meanwhile, used its ClearPad, NavPoint, and TouchButtons sensor electronics in the design.