The party is on for video game entrepreneurs. Big Fish Games just raised the bar for the industry by reeling in a huge venture round by video game standards.

The Seattle-based casual downloadable games company raised $83 million in a first round of financing from Balderton Capital, General Catalyst Partners, and Salmon River Capital. That’s the biggest round I can remember for a game company. The deal is the largest in the state of Washington this year, according to the National Venture Capital Association. That’s pretty impressive, given the state of the economy. But the game industry has proven resilient during the recession.

This will certainly prompt questions about whether games have hit a bubble peak. But Jeremy Lewis, chief executive of Big Fish, said in an interview that his company is profitable and its execution is solid. Big Fish reported $50.8 million in revenue last year and has grown revenues more than 100 percent a year in the past three years.

“Do I think the market is frothy?” Lewis said. “In some areas of online games, that may be true. I’m not an expert on that. But we don’t feel that is the case with our own company.”

But the surprising thing here is that Big Fish has a business model that is considered old and decrepit among the newest game startups. Big Fish uses the “try before you buy” downloadable games business model. You can download a game from Big Fish and play it for free. But after an hour, you have to decide whether you want to pay or move on to the next one.

These days, ad-supported models supported by companies such as NeoEdge Networks or Mochi Media are more popular. Korean and Chinese online game companies have adopted a “free to play” model, where they monetize their games through sales of virtual goods. But Lewis said that the older model has served the company well. 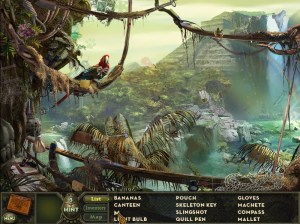 Big Fish was founded by former Real Networks game executive Paul Thelen in 2002. It now has 310 people. And, no, they’re not in China or India. Big Fish has bucked the outsourcing trend as well, with all but four of its people in the Seattle area. More than 500 independent developers work with the company now, providing games that Big Fish distributes on its web site.

More than 1 million games are played every day and 50 percent of sales are overseas. The company is launching a version of its site in Japan and has expanded to various parts of Europe. There is no particular plan for the new funds, but Lewis said they give the company a very strong balance sheet. And although he said the company has no acquisition plans per se, Lewis said the company has the funds to acquire if it needs to. He looks at his big fat wallet as giving him “strategic flexibility.”

Prior to today, the company raised $8.7 million in angel funds — in two different tranches — in 2005. Growth has been strong thanks to the extended reach of broadband, a growing interest in casual games among all demographic groups, overseas expansion, and strong social networking.

Big Fish has tried to be a MySpace of games by creating reward programs for those who spread games in a viral fashion, sharing them with friends. After a year, players get rewards. And they can chat with each other in forums built into the site. The company has partnerships with Activision Blizzard, which publishes some of the company’s biggest hits in retail stores, and Nintendo, which recently published “Mystery Case Files: MillionHeir” for the Nintendo DS. Mystery Case Files was a big hit on Big Fish.

Rivals include casual game companies of all sorts, including Real Networks and Electronic Arts’ Pogo.com division. Compete.com shows that Pogo.com has far more unique visitors a month than Big Fish, while the traffic at Disney’s Club Penguin is equal to that of Big Fish.

Lewis said that the company continues to experiment with new business models, and he noted that more than half of the company’s staff is dedicated to research and development.