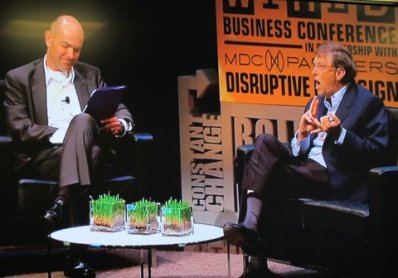 In a conversation with Wired Editor-in-Chief Chris Anderson today at the magazine’s third annual Business Conference, Gates said that one of the best aspects of nuclear power at the moment is its lack of innovation thus far, which leaves it ripe for disruption in the coming years.

When it comes to Japan’s current nuclear trouble, Gates pointed out that the Fukushima plant is an older second-generation reactor. Third-generation plants, as well as upcoming fourth-generation plants (which he’s also invested in), can easily avoid most of Fukushima’s problems — primarily because they have better ways of dealing with the afterheat that results after a nuclear plant shuts down. One third-gen design keeps a pool of water ready in the case of a plant shutdown, while fourth-gen designs have methods in place to avoid the afterheat problem completely.

Gates also points to software simulation, which helps new plants prepare for potential issues like the post-quake tsunami that shut down Fukushima. We need to use computer simulation because there is “no way humans can predict these things,” he said. Gates predicts that by 2030 we’ll have hundreds of new fourth-generation nuclear power plants on line.

But why stick with nuclear power in the first place? Gates pointed to nuclear’s “factor million” energy creation advantage over coal. And of course, nuclear doesn’t emit any CO2 waste either.

“We have to be safe, and be able to communicate that we are safe,” Gates said, referring to how we can change nuclear’s negative public image.

As for nuclear waste, Gates said that it’s a solvable problem, and it shouldn’t prevent us from deploying more nuclear reactors. He said that if the entire US was powered by nuclear, we’d still be able to safely store all of the waste. We should also consider how much of a problem a “miniscule storage area” of nuclear waste will be in the future if it’s clearly marked, and if we can easily move it in a thousand years, Gates said. He pointed to the nuclear plant designs favored by TerraPower, a company that Gates is also a major investor in, that create 1,000 times less waste than a typical nuclear plant.

As for other energy technologies, Gates said that we should be looking at all of them. He saw potential in solar technology, but only in large scale deployments. Gates called rooftop solar cells for homes “cute” — something that rich people can do, but that ultimately won’t solve our energy crisis. He also seemed completely unconvinced that hydrogen fuel will play any part in our future. Instead, we may be better off converting hydrogen into hydrocarbons that can be used in existing infrastructure.