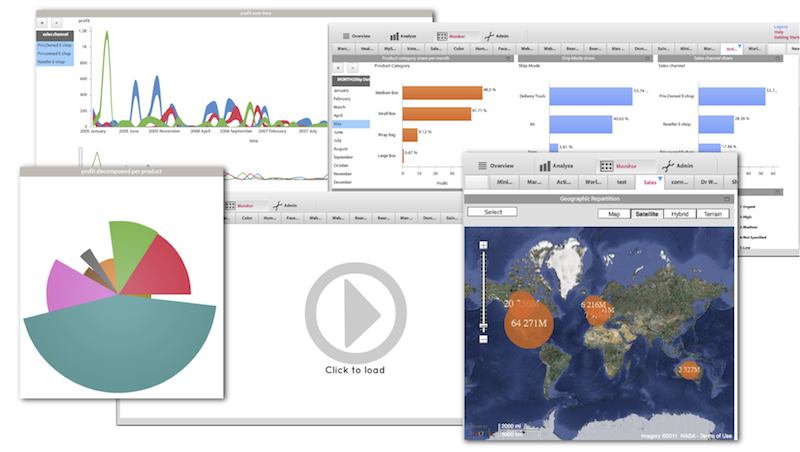 Everybody wants big data, but nobody wants to muck around in SQL queries. And while Hadoop is a hot topic, most people have no clue what it really does, let alone have the skill to use it.

That’s where business intelligence tools like Bime come in. Bime, which just launched version 4.0 of its browser-based data mining and data visualization tool, promises to make diving into enormous databases as pleasant as taking a swim in a cool city pool.

Well, almost. You still have to understand a little about database fields and pivot tables, but in a demo I saw yesterday, Bime was remarkably simple — and fast — at turning a database with more than 400 million rows into pretty bar charts, pie charts, and network visualizations. Essentially, it’s a more user-friendly front end for whatever gigantic databases you already have, and it’s one that marketing managers and sales executives can use, without a lot of handholding from the IT department’s database gurus.

The data on the back end can come from Salesforce.com, Google Apps, Google Analytics, and more traditional data repositories, such as MySQL, SQL Server, or Oracle.

Bime 4.0 adds support for Google BigQuery, a web service that lets you do queries against enormous data sets — databases with billions of records, for instance. The company also offers BimeDB, a hosted database that’s optimized for analytics, so companies can store their data with Bime as well as using it as the BI front-end.

Bime costs $60 to $240 per user, per month, depending on the options. For more details, check out this page of video demos that show what Bime does.

The company that makes Bime is called We Are Cloud, although it’s changing its name to BIME (in all caps, though I refused to spell it that way) to match its leading product. We Are Cloud has 15 employees and is based in Montpellier, France. It has raised several small rounds from angel investors in the U.S. and Europe but has not disclosed the total amount of its funding. We Are Cloud debuted in the U.S. at Demo Fall 2011.