The Bing-Google beauty contest continues today as both search engines got geolocated tweets for maps. This is a no-brainer with Twitter’s recently released location application programming interface, but who does it better?

Bing wins points for aesthetics. There’s a button to update tweets directly on the page, plus Twitter-branded markers for each point on the map. Twitter avatars also appear in the left-hand column.

This test of a Google integration is pretty plain so far, but expect it to change. It’s a map of where Twitter’s API team is this morning. You can actually play with it yourself, if you want by changing the name of the account and list in the search bar.

Now that Twitter users can tag their tweets with their location, expect many mashups. What could you do? Here’s a few ideas: 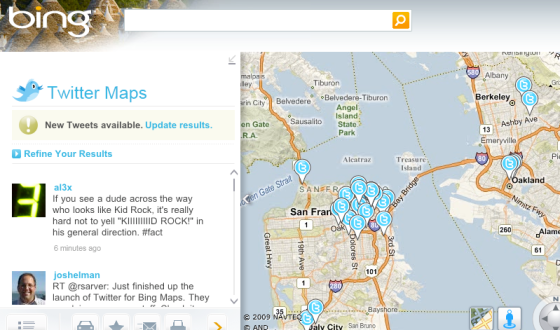