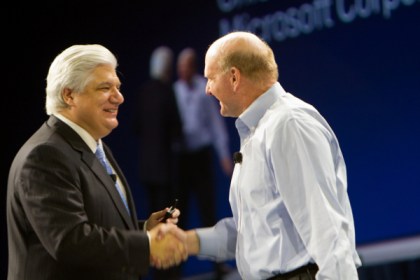 At the BlackBerry World 2011 conference today in Orlando, Florida, today, Microsoft CEO Steve Ballmer announced that its Bing search engine will be replacing Google as the default search and maps provider on all of Research in Motion (RIM)’s BlackBerry devices.

The Bing search engine has been steadily gaining market share — it currently holds 27 percent of the search engine market compared to Google’s 67 percent — and this deal comes as a major breakthrough.

In addition to RIM’s smartphone devices, Bing will also be serving as the default search and maps provider to PlayBook, RIM’s upcoming tablet competitor to Apple’s iPad.

According to The Register, the agreement may also include a clause to make Microsoft’s upcoming mobile browser IE10 the default browser on the BlackBerry. A deal like that would make for an interesting collision in the mobile browser market, with Apple’s iPhone and Google’s Android backing Webkit-based browsers, and Microsoft’s Windows Phone 7 and RIM’s BlackBerry backing Internet Explorer.

Microsoft also showed how some of its more advanced capabilities, such as search with optical character recognition cameras, voice, local restaurants, and deals will be integrated into the BlackBerry platform, as well as its Streetside block view and Photosynth panorama features for Maps.