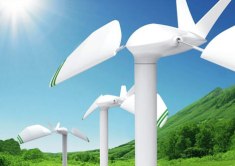 With a 19-foot wingspan, the two-blade model is designed to shatter assumptions that windmill-style turbines are the best for energy generation. Current turbine architectures usually convert about 30 percent of the wind caught into usable energy. Green Wavelength believes more innovative ideas, taken out of nature’s playbook, could be much more efficient — and better suited for a variety of applications. Here’s a video of the turbine at work:

No one wants an industrial or utility-scale wind turbine in their back yard. But wind could be a viable method for residential and urban power generation, especially in the developing world. Solar panels are too expensive for most consumers interested in creating and using their own clean energy. Some smaller, quieter, residential turbines have appeared on the scene, but their efficiency is usually even lower. San Francisco just presented plans to integrate more turbines into its urban landscape, and it probably won’t be the last.

Lightweight (made from aluminum and carbon fiber), somewhat smaller and aesthetically interesting, the turbine could potentially be used for electricity generation in off-the-grid communities. They are still a little expensive for average consumers — the company will have to find solutions that bring down the cost before they’ll win wider adoption.

The turbine was named among 50 finalists in the Perfect Pitch 2009 entrepreneur conference keynoted by Richard Branson last week.

The six-person Green Wavelength team, based in Los Angeles, is led by Sabri Sansoy, a graduate of MIT interested in integrating biomimicry and cleantech. The company’s blog points to other prominent examples of technology inspired by nature, including special coatings for ship hulls that resemble shark skin, solar panel tracking equipment that operates like plant leaves, and tidal power systems that look like tuna.