Mike Gamble has an appropriate last name as the lead producer on BioWare’s new science-fiction video game, Anthem. Electronic Arts, the parent company of BioWare, has made a huge bet on Anthem as its first new intellectual property in a decade.

The four-player co-op title debuts on February 22 on the PC, Xbox One, and PlayStation 4. But we were able to play about six hours of the game at a preview event at EA’s headquarters in Redwood City, California. Gamble was on site to tell us about the state of the game, which admittedly has a few bugs still. I played a handful of missions and roamed around the world in a free play session.

Gamble said that Anthem is its own world, despite whatever similarities it may have to other sci-fi games like Activision’s Destiny. It has a full campaign story with that traditional emotional narrative that BioWare is known for. But the game is meant to be played with your friends. Once you play through the missions, you’ll be free to roam as you wish and to come back and play the new missions that BioWare will launch, well after the initial launch date.

In that way, Anthem is a video game that introduces you to a world with a story that isn’t supposed to end. I talked to Gamble about what BioWare tried to do and how the game is turning out as we move into the home stretch before the launch. 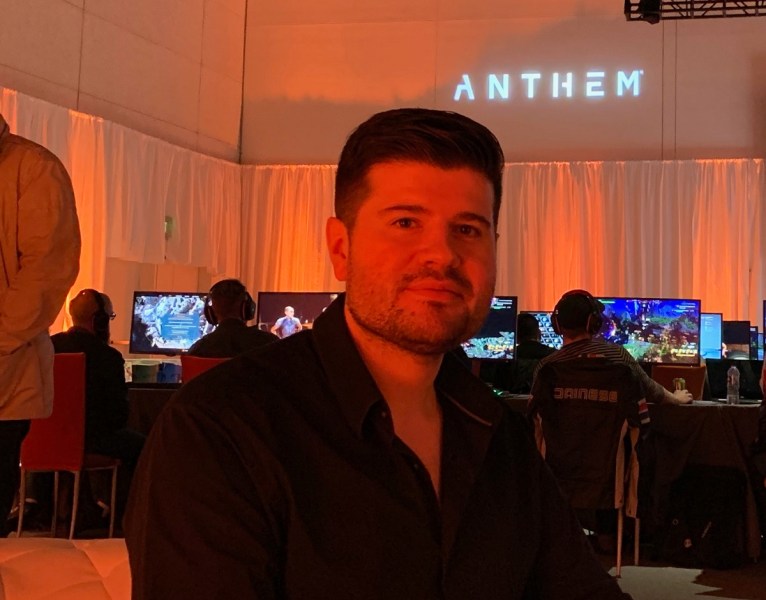 Above: Mike Gamble is the lead producer at BioWare on Anthem.

GamesBeat: What’s your role been on this project?

Mike Gamble: Lead producer. I’m responsible for working with the executive producer to make sure the vision of what Anthem is is expressed in the game. That filters through all the things we do. Ultimately I make sure that things get done. I was on Mass Effect, the trilogy and Andromeda, and then once Mass Effect was done, I moved over to Anthem.

GamesBeat: What were you thinking about at the beginning, what kind of game this would be? Especially compared to Mass Effect.

Gamble: We wanted something cooperative. We wanted something you could play with your friends. You could experience a great story with your friends in a cooperative environment, not a single-player environment. That was the inception. We wanted to make something very different from what we’d done before in terms of setting. It wasn’t high fantasy or high science fiction. We wanted to make a platform for us to continue to tell great stories for a long time. Those were the goals.

GamesBeat: What kind of BioWare DNA is still here? Is there still that emotional story?

Gamble: I think so. Hopefully, when you play it, you start to see some of the characters’ personalities poking through. Eventually, they grow on you and you like them more and you care about what happens to them. You care about the things you can prevent and the things you can’t prevent. You get engaged in this crew, in this world. You look forward to seeing what happens with them. That’s what we’re hoping.

GamesBeat: If we look at the map now, where we are, how much of the world are we seeing in these different sections?

Gamble: That’s the open world for the game. You’re seeing that. The world itself — what you don’t see on the map is the verticality and the things you can discover by going over and under, things like that. To navigate through the world, it actually takes quite a while, especially considering all the things you can find and collect and fight on the way. 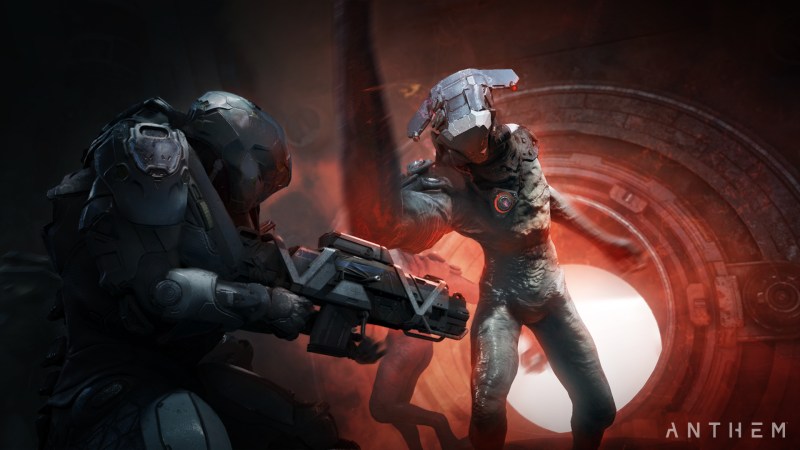 Above: Anthem’s trying to capture the BioWare rep for narrative.

GamesBeat: When I came back from the free play, it showed me a little map of where I was. It had little squiggly lines from where I’d just been flying around. Once I’m more used to it, how would I recognize things and not get lost so easily?

Gamble: Certain regions have certain markers, visual geometric markers, whether it’s a giant tower or a Scar encampment on the side of the mountain. There are visual markers.

GamesBeat: When a name comes up, is it telling you the mission, or where you are?

Gamble: That’s the location, the region. And of course there’s your map and you can see where you went. There’s a compass you can use to navigate around, east and west, north and south. Some of the things you can do are denoted by in-world objective markers and others aren’t. Collectibles and smaller things for you to find are secret. There might be a little VFX bubble around it and you can spot that. If you’re on a mission, it will lead you around.

GamesBeat: It’s not a very crowded HUD. Did you want that for a particular reason?

Gamble: Yeah, we wanted it to be pretty clean. There’s a fantasy to flying around and seeing the Javelin and the beautiful world. We didn’t want to have too much stuff in there. There’s a lot of it in your map, though, once you press the button and see it.

GamesBeat: How do you feel about where your buzz is, a month out? What are you hearing back?

Gamble: We feel pretty good, actually. One thing we’ve done differently on this game versus some other ones is we’ve been pretty transparent with what we’re doing. We’ve had live streams. We’ve talked to the press a lot. We’ve talked to the fans and influencers a lot. We’ve been open with the things that are in the game and the things that aren’t. We’re not lying about anything, certainly, but we’re not really holding any information back, either. I think the fans are liking that.

Launching a new IP is always this way. It’s easy to say, “Hey, have you seen the 14th sequel to whatever game?” You know what that is because you know the last 13. For a new IP, you have to build that knowledge from nothing. We’re happy with how people are enjoying it. We have a lot of good feedback from events like this, and alpha tests that people are not supposed to talk about, but they talk about anyway. [laughs] All that stuff. 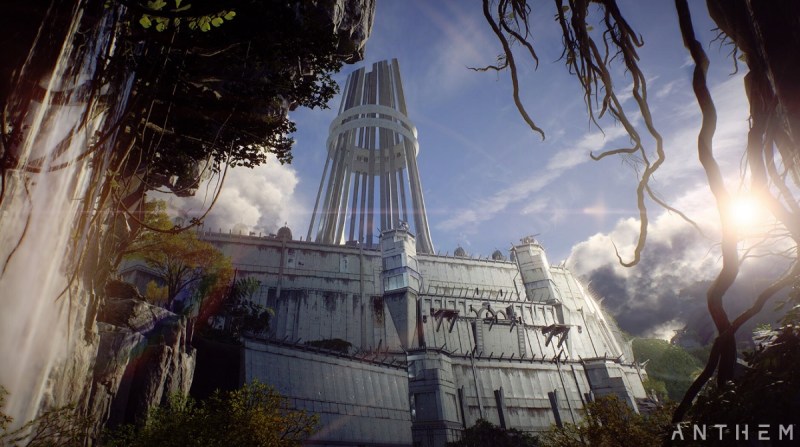 Above: Fort Tarsis in Anthem.

GamesBeat: Going into this, are we supposed to already know what Anthem is about? Or is that part of the mystery?

Gamble: What you see in the game at the beginning, it’s a cold open into the world. It onboards you a little bit, but we want the world of Anthem to be a mystery. We want people to be able to explore and find out more and more about it. We’ve done five or six trailer-type things which paint the world, paint the story, give you the context you need to start playing, but then after that, you need to discover for yourself.

GamesBeat: This thing with a lot of lights at the center of it all, it’s just randomly spitting out creatures?

Gamble: The way it works, the world was created by these gods. It was actively pushed together through this force called the Anthem of Creation. That’s what we call it. They called it something completely different.

GamesBeat: So they left it there and all this stuff comes out?

GamesBeat: Since it’s a live game, how do you pave your own road there? It reminds me somewhat of where Destiny started, how they would introduce new chapters in new versions. In your vision of where this goes in the long term, what do you want this to be like?

Gamble: I want it to be like Anthem. Ultimately what that means is, a long-tailed game that has great characters and great storytelling at its core, with the superheroic fantasy of flying around. You can play by yourself if you want, but we don’t necessarily want you to. We want this to be a cooperative experience. We really do. The game shines the best when you and other players are playing together. It’s very different in its DNA from some of the other “looter shooters.” We want to lean into that.

GamesBeat: When you release an update, what kind of update would that be? A new campaign? A new chapter of story?

The world state–once you go into free play, or even on the missions, that big world out there is controlled by us completely. Fort Tarsis is controlled by you. The choices that you make and the things you do, it will change based on that. But when you go out, that’s us.

GamesBeat: You could do a cataclysm, like in World of Warcraft. 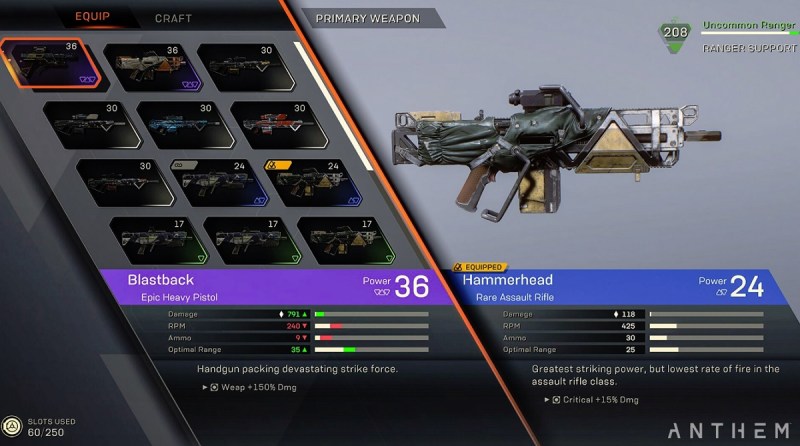 GamesBeat: Is it a little like Tides of War in Battlefield, where a series of things will happen?

Gamble: Yes and no. We’re not talking a lot about the story progression post-launch yet. We’re going to launch first and then give people an idea of what they can expect in the future. We want to keep that fairly vague so we can surprise people. You can be playing, and then on Friday something might happen, or next Monday, or whatever. We want to keep people guessing a bit.

GamesBeat: Is that all scheduled at this point, though?

Gamble: Yep. We know what we want to do. To be totally honest, there’s a portion of the live team that says, “This is the plan. This is the thing we want to do once we launch the game.” They have a narrative arc that they want to tell. And then there’s another part of the team that says, “OK, depending on what the fans want and what everyone yells about, we can react to those things.” There’s both of those.

GamesBeat: If you go into something with just one character instead of four, does the number of enemies change, or the difficulty?

Gamble: Both. It’ll scale the numbers based on whether you’re one, two, three, or four players. It’ll scale the difficulty as well. Maybe fewer enemies will show up at a certain thing, and those enemies will be weaker. But ultimately it’s going to be really challenging if you want to play alone on the hardest difficulty. The game just isn’t balanced to make that a walk in the park. You can play on easy if you want, and you can probably play on normal, but we want to encourage players to group up and be friends.