The price of the Bitcoin is at its lowest in almost five months, after two major challenges to its legitimacy.

The first challenge struck last Tuesday, when the U.S. Internal Revenue Service ruled that Bitcoin must be treated legally as property, not currency.

The IRS ruling may stem the spread of Bitcoin in the U.S., according to analysts, because the ruling means any gains investors see from the appreciation of Bitcoin are taxable.

New York tax attorney Jeffrey Hochberg told CNNMoney that the going rate of the currency fluctuates too widely, and would create an “accounting nightmare” for taxpayers.

The PBOC has yet to issue an official response to the rumors, keeping Bitcoin prices low through today. According to the CoinDesk USD Bitcoin Price Index, the price of the cryptocurrency tumbled from $580 on March 26 to today’s low of $442, around a 31% drop. 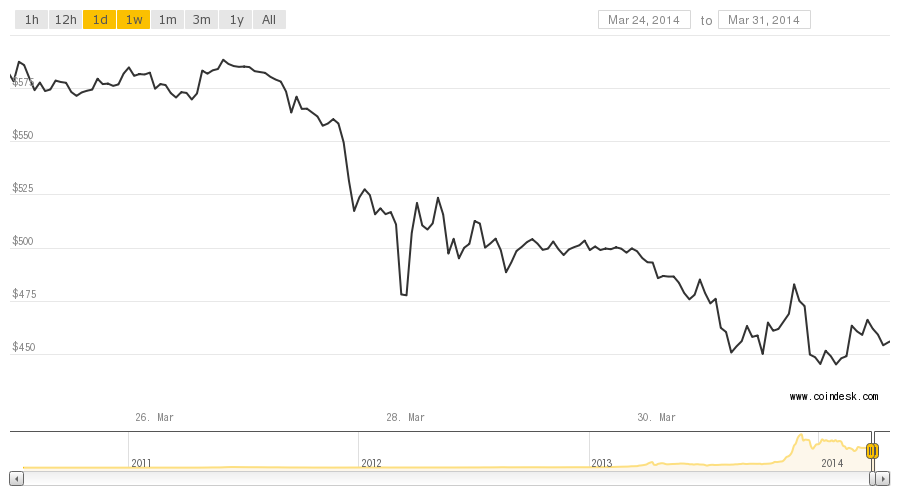 Above: Graph of the Coindesk Bitcoin Price Index for the past 7 days.

The last time the price of the Bitcoin was below $450 was in mid-November: 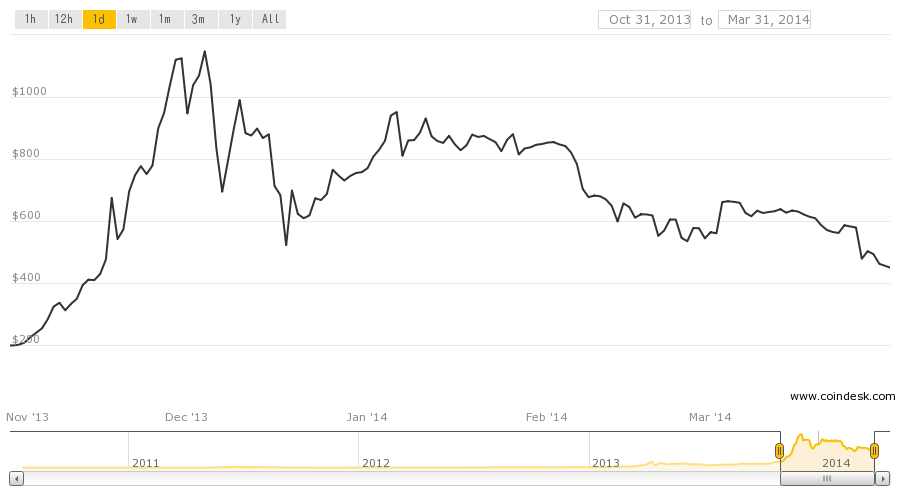 The heavy silence from the PBOC this week is a stark contrast to PBOC officials’ swift response to a similar rumor just two weeks ago. On March 21, a false post in a financial news feed on China’s Sina Weibo microblogging platform suggested that China’s central bank was going to block the trading of Bitcoin beginning in mid-April.

At that time, PBOC officials pointed users to a regulation that began in December 2013 banning Chinese financial institutions from using the currency. The PBOC’s regulation warned banks and payment companies against giving pricing in Bitcoin, buying or selling the virtual currency, or even insuring Bitcoin-linked products, according to the bank’s website.

VentureBeat has reached out to the PBOC for comment and will update when we hear back.