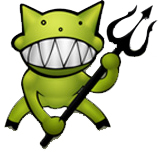 Within the past week, three of the most popular sites for peer-to-peer sharing have either turned off or banned users from the United States. Most recent is Demonoid, the second most popular sharing site; it appears to have been cut off by its internet service provider due to the efforts of a Canadian agency called the CRIA, according to TorrentFreaks.

P2P sharing, a method by which files can be shared through a distributed network of users rather than sent out from a single server, has a spotted reputation in the United States. It is associated with illegal downloading of movies, music and other copyrighted material, a trend that began with early P2P networks like Napster and Kazaa, and led up to today’s Bittorrent standard.

Despite the distributed nature of P2P sharing, Bittorrent files are tracked through specialized servers that help to keep user’s downloading orchestrated, so turning off the server is regarded as the coup de grace against file sharing. The rapid-fire closure of several websites, if only in the US, could mean that the tide is turning in a protracted legal fight against the sites that most often assist in illegal P2P file sharing.

Demonoid had based its servers in Canada after a Dutch anti-piracy group called BREIN filed a subpoena against their ISP in the Netherlands. A similar scenario now appears to have played out with Canadian authorities, limiting the service’s options for further relocation.

Another highly popular site, Isohunt, stopped tracking users based in the United States earlier this week, saying on its homepage that the move was “due to the US’s hostility towards P2P technologies.” Isohunt runs several of the most popular trackers, including TorrentBox, and also provides a centralized search service for files; the company claims that it regularly cooperates in removing copyrighted material.

TorrentSpy, the first of the trio to block US users from its service, did so a month ago.

Although other Bittorrent sites have been closed in the past, the loss of three of the most popular in such short order threatens to disrupt the grassroots community that has grown up in the US around sharing. If more closures or blocks follow — especially if that were to include The Pirate’s Bay, the de facto community leader — illegal P2P sharing could lose much of its steam.

That could in turn drive more business from casual downloaders to legitimate companies. BitTorrent, for instance, a company started by the same people who invented the protocol that legitimized itself earlier this year, sells movies, music, and other media.

Another company that uses P2P for legitimate file sharing is Joost, which we reported on earlier this year when both it and BitTorrent were looking for sharing deals.

The fight is far from over, though. Last week, emails from an anti-piracy company called MediaDefender were leaked onto the internet, revealing that the company’s strategies included creating a Bittorrent tracker to entrap people who used it for illegal downloads, and seeding other networks with corrupt files. The company’s actions could expose it to legal retaliation.

And the legal tactics used by the RIAA, an organization backed by major media companies, also appear to be backfiring. The company, which focuses on suing individuals it accuses of file sharing, has met with a string of setbacks in court. As PPInternational puts it, “Some lawsuits have proven ridiculous from the outset, targeting computer-illiterates and dead people, or accusing grandmothers of downloading gangsta rap. Others have been dismissed for a lack of evidence against the purported file-sharers. Nearly every standard weapon in the recording industry’s legal arsenal has been proven ineffectual at best, and unconstitutional at worst.”

Update: BitTorrent’s Ashwin Navin had the following comment on this story:

“No amount of litigation will eliminate online piracy. Piracy will only be mitigated when media companies acknowledge piracy as a competitor. To compete with piracy, we have to offer consumers more reasonable prices, get DRM out of the way, and offer as much media as possible for free, supported by sponsorships. That way the experience for legal content is dramatically better, and the consumer value proposition for piracy is reduced.”

For further discussion, see the comments below.