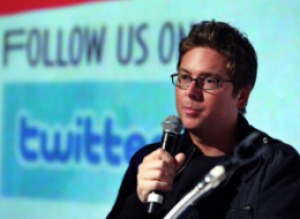 White-hot microblogging startup Twitter has no plans to take the company public anytime soon and is not looking for outside funding right now, co-founder Biz Stone reportedly told Reuters at a business forum in Seoul today.

“We have so many other things before we even think about that,” said Stone (pictured). “We are not even discussing it internally. It’s too far off.”

Stone also put the kibosh on a story in the Financial Times earlier this week that the company is in talks with banking behemoth JPMorgan Chase & Co. to sell 10 percent of Twitter for an estimated $450 million.

Stone said the story was “made up” and that the company is currently making money and won’t be shopping around for supplemental funds for at least a year.

“We make money. We earn money from a suite of products … We have promoted tweets … promoted accounts, all of which are in our advertising mechanism,” said Stone. “We are just really getting started. We have some internal forecasts [for advertising revenue for 2011], but nothing is really shared right now. We don’t need to set the world record or anything like that.”

Investors looking to get a piece of Twitter’s international buzz pre-IPO have been pouring money into the startup for the past year.

Last month, Netscape co-founder Marc Andreessen’s venture capital firm invested $80 million in Twitter via the secondary markets, while in December Twitter nabbed $200 million in a deal that valued the company at $3.7 billion.

The money at stake is significant.

Industry tracker eMarketer said in January that Twitter likely generated an estimated $45 million from advertising in 2010 and could generate about $150 million this year. The startup does not disclose its financial information.

The possibility of getting in early on a company that will possibly be one of the most anticipated IPOs ever has had plenty of investors looking to snap up shares of the Twitter on the secondary markets, where early investors and employees can sell off their stock in companies.

That trend has continued across the industry, as the darlings of Silicon Valley like gaming company Zynga and social network Facebook have watched investors grab chunks of their companies before going public.

The practice had become so prevalent that the U.S. Securities and Exchange Commission said in December it was “investigating” how groups of investors were buying stock via the secondary markets — especially for tech firms.

San Francisco-based Twitter was created in 2006 and currently employs about 350 people.