I don’t think you’re ready for this Jelly. Biz Stone’s Jelly, that is.

At long last, the Twitter cofounder has unveiled his long-stealthy startup.

“Humanity is connected like never before,” Stone said in a blog post. “In fact, recent white papers have concluded that the proverbial ‘six degrees of separation’ is now down to four because of social networking and mobile phones. It’s not hard to imagine that the true promise of a connected society is people helping each other.” 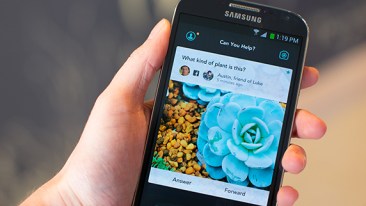 “Using Jelly is kinda like using a conventional search engine in that you ask it stuff and it returns answers,” Stone said in a blog post. “Jelly changes how we find answers because it uses pictures and people in our social networks. It turns out that getting answers from people is very different from retrieving information with algorithms.”

Williams said this would be his main focus, and about six months later news leaked that Stone was working on a new startup of his own.

Stone posted a number of vague, teaser blog posts about how “our society is more connected than ever before” and that “a group of jellies is called a bloom.” We gathered from these posts that Jelly would somehow involve social networking, but the actual product remained shrouded in mystery until now.

Stone is by no means the first to create an app for asking your friends questions. However, most of the rivals — such as Ask, Questions, Photopoll, GoPollGo, Seesaw (acquired by Byliner), Photopoll, and Askem — focus on decision-making. Thing such as “Which dress should I wear.”

Jelly questions are more along the lines of “What is this in the Presidio?” or “What kind of plant is this?” A closer competitor might actually be Snaplay, a reverse image search app where you can take a picture and have it identified, or traditional search engines.

Jelly closed funding in May to help it get off the ground. The undisclosed round was led by Spark Capital, with participation from SV Angel and an elite group of angel investors including Jack Dorsey, Bono, Reid Hoffman, Steven Johnson, Evan Williams, Al Gore, Greg Yaitanes, and Roya Mahoob.