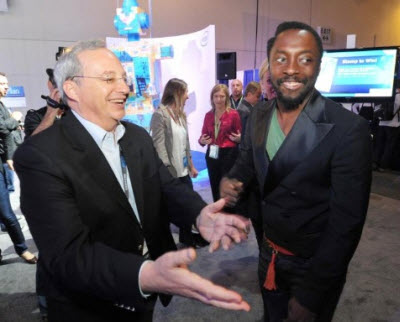 Will.i.am, star of the pop music group the Black Eyed Peas, said yesterday that his creative role at Intel has changed his life. The musician opened the tech showcase for the Intel Developer Forum and said it was like looking at the future (see the video below).

Will.i.am has become a spokesman for promoting technology and education in his work with Intel. In doing so, he’s helping change the perception that technology is just for antisocial geeks. One of the themes at this week’s Intel Developer Forum is everyone will become a creator in the future.

Will.i.am became director of creative innovation at Intel in January. At the time, he referred to Intel’s chips as “my brain’s friend,” and said the technology he uses to make his music is all about “amplification.” He added that the focus on tech and education had inspired his music. Will.i.am wrote the score for an Intel commercial and created a TV show called I.am FIRST — Science is Rock and Roll, about the 20th anniversary of the Lego robotics competitions for schoolchildren. The ABC special aired in August.

“A little girl on Twitter told me my work with Intel inspired her to work on computers,” Will.i.am said. “A little 13-year-old. It’s amazing what this collaboration has done and it’s just the beginning.”