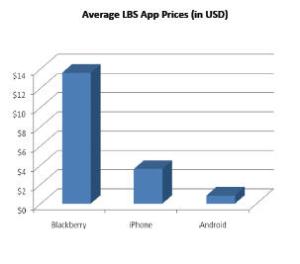 BlackBerry users pay more for their apps. Lots more. That’s the finding of a new report from Skyhook Wireless, maker of location-based service software. Skyhook’s study found that BlackBerry apps average around $12 each, compared to the popular $2.99 price for an iPhone app and Android apps that average less than a dollar. Most Android apps are completely free.

Skyhook’s study also confirmed the conventional wisdom that users are cycling through apps, buying new ones and abandoning last month’s downloads. “App usage drops off considerably after the first 14 days of use,” says the report.

Besides price, Skyhook found other major differences among the three most prominent app stores: