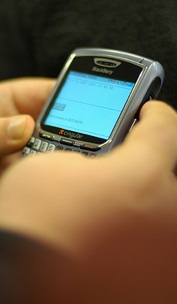 BlackBerry maker Research In Motion (RIM) can see the writing on the wall. No doubt already concerned about some of the new business-friendly functionality (Microsoft Exchange support for example) coming to Apple’s iPhone with the 2.0 software release in a couple of months, now comes word that Apple will be entering RIM’s own home turf, Canada (RIM is headquartered in Waterloo, Ontario). As such, the company has an interesting Apple-centric job listing that was uncovered by AppleInsider today.

The details are pretty sparse and border on cryptic:

“As part of a newly-created team, you’ll influence the development and design of BlackBerry software. This is a very confidential brand new team and a senior position within RIM so I can’t provide too many details. I guess you can figure out what it might be about though.”

It would seem more likely that RIM is working on a next-generation BlackBerry with features and functionality comparable to the iPhone — and who better to help out with that than developers who have experience in developing for it and the Mac in general? The company was recently forced to delay the launch of its 3G BlackBerry for AT&T (also the provider for the iPhone) until late summer. This will be a huge blow if Apple is able to get its 3G iPhone out the door first — which is expected.

With better support for business applications and 3G network speed coming to the iPhone, one of the last bastions of hope for the BlackBerry may be its physical keyboard. Though initial concerns about the iPhone’s virtual keyboard crippling the device were unfounded, it’s still a sticking point for many potential users. Rumors have been circulating that Apple could be considering a version of the iPhone with an actual keyboard, or more interestingly, with a screen with haptic feedback technology so you could feel where you were typing on a screen without there being anything physical to feel.

There is more troubling data for BlackBerry as well. A recent survey of BlackBerry and iPhone owners found that while many of the problems iPhone owners have with their devices are likely to be remedied soon with the 3G iPhone (speed of the EDGE network, copy & paste not available, battery life, third-party software not available, etc), many of the things BlackBerry users don’t like are not slated to be fixed at this time (the browser, application problems, etc).

It is also interesting to note that the number two dislike for Blackberry users was, in fact, the keyboard. If that’s true, RIM had better hurry along in filling the new job opening — the race to have the best iPhone-clone is already well underway.