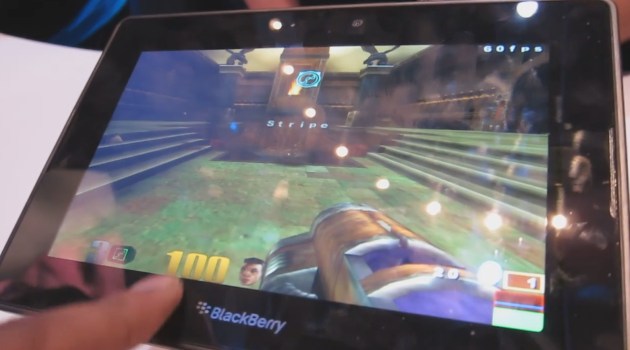 Amidst great looking Android tablets like the Motorola Xoom and the impending iPad 2, Research in Motion’s BlackBerry PlayBook has an uphill battle to fight this year.

But I don’t think RIM is going to  have much problem getting people excited about its device. The 7-inch PlayBook is a surprisingly sleek tablet entry from a company that I (and many others) had previously lost faith in after the release of the lackluster BlackBerry Torch. I had a bit of hands on time with the tablet on the show floor of the Consumer Electronics Show last week, and I was immediately struck by how fast and media-centric it was. The PlayBook definitely isn’t just for business users.

In the video below, you can see for yourself just how responsive the PlayBook’s interface is. The tablet is running an operating system based on software from QNX, a company RIM bought earlier last year, which looks nothing like the clunky BlackBerry software the company is known for. It feels like a modern OS, and it’s definitely something that will be able to go toe-to-toe with the tablet-friendly Android 3.0 release and iOS on the iPad.

The video also demonstrates how RIM has incorporated touch sensitivity into the device’s screen bezel. When inside an app, you simply have to swipe up on the bottom bezel to get back to your home screen. Swiping on the left or right bezel when playing media easily takes you to the next item. It’s not exactly intuitive for first-time users — both iOS and Android have taught users to look for a physical “home” button when inside an app — but I think it will be worth the learning curve for most.

RIM still hasn’t announced how much the BlackBerry Playbook will cost, and it’s expected to be available some time in the coming months.