Love it or hate it, you have to hand it to BlackBerry — the Passport is different.

Whether it’s a good kind of different or a bad kind of different is still being hotly debated, but at least the company that has been roundly criticized for doing a poor job of playing me-too to Apple, Samsung and others, is attempting to break free of the pack and blaze its own trail. You have to respect that.

The real question is, can we respect the Passport, with its odd, square-ish shape, heavy weight, and its unusual implementation of the physical keyboard? Perhaps. Here are the top good and bad aspects of the latest BlackBerry.

Though it lies at the heart of the Passport’s atypical dimensions, the 1,440 x 1,440 screen is superb. Not only does it provide plenty of contrast, brightness, and off-angle visibility, its pixel density (at 453 ppi) is better than that of the iPhone 6, 6 Plus, and the Samsung Galaxy S5. It’s so good that, even though it’s a phone, you’re tempted to view the desktop version of websites (something the browser lets you choose if you want).

Unlike typical rectangular screen phones, there’s no real-estate benefit to rotating the Passport sideways because it’s a perfect square, but since the keyboard is touch-sensitive and can be used to scroll, a sideways orientation allows for scrolling without impeding your view of the screen which is a nice touch. 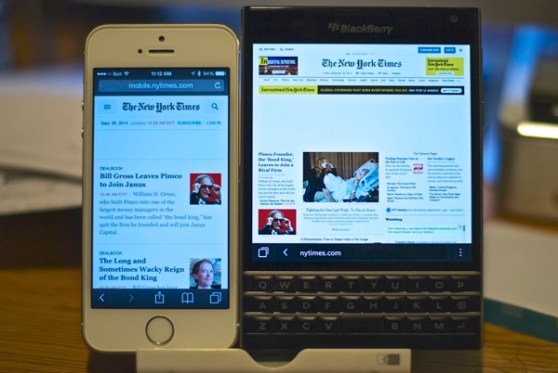 BlackBerry made a big deal about the Passport’s internal speaker at the launch event, claiming it had significantly better specs than both the HTC One M8 and the Samsung Galaxy S5. There’s no doubt about it, it sounds good — really good. It’s easily the best BlackBerry speaker so far. Which is to say it’s now as good as the iPhone 5s. 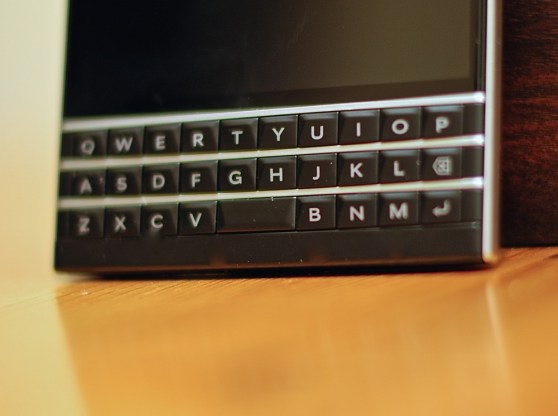 Let’s assume for the moment that you actually like physical keyboards, because if you don’t, you probably wouldn’t even consider the Passport. If you do like them, you will — with a little bit of learning curve — like the Passport’s keyboard a lot.

Its three-row layout takes some getting used to, as does the fact that extra keys appear on-screen immediately above it along with predictive word suggestions. But as with all other BlackBerry keyboards, the tactile feel is superb, as is its responsiveness.

But the part you will learn to love is the way BlackBerry has made the keyboard touch-sensitive, allowing it to respond to gestures. While typing, swipe up with your thumbs to select suggested words as they appear, or swipe to the left to delete an entire word. When on a scrollable screen, swiping up and down scrolls the content. None of this is groundbreaking — these are the same gestures BlackBerry has used on its Z10 and Z30 BB10-based devices — but it marks the first time a physical keyboard has been more than just a keyboard.

I’ve always felt a little sorry anytime I’ve seen another parent trying to snap photos or video of their kids with a BlackBerry. I just know they’re not going to be super happy with the results. That changes with the Passport. For the first time, a BlackBerry now has a camera that is equal — and in some cases superior — to any smartphone on the market. The specs just can’t be denied: 13 megapixels, OIS (optical image stabilization), a 5-element lens, f-2.0 aperture (a full f-stop faster than even the iPhone 6 and 6 Plus), and backside illumination. Compared to the iPhone 5s, the Passport produces photos with greater detail, richer color, and better contrast.

Though it was possible to access Android apps via the Amazon App Store prior to the Passport and its 10.3 version of BB 10, it wasn’t officially supported. Now it is, and it works well. For the first time, BlackBerry users can dispense with the awkward “side-loading” technique for installing Android apps. Of course, the degree to which these apps are compatible may vary, but at least BlackBerry verifies that every app downloaded via Amazon has been checked for viruses and malware, which goes a long way to making BlackBerry users feel secure. And we know you like security! 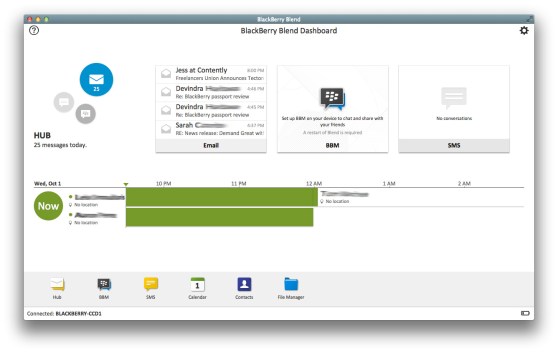 This might just be the most exciting thing BlackBerry has produced since the original BlackBerry Bold. BlackBerry Blend is a software suite that lets you access the contents of your Passport from any PC, Mac, or tablet (iOS and Android) with a free app — a brilliant way to bring your phone’s capabilities onto a bigger screen and to provide productivity-insurance for those times when you accidentally leave your device at home or the office. Blend will let you access your Passport from anywhere in the world. You can also manage and transfer files to and from the Passport. The software isn’t bullet-proof yet, but it will be, and it’s amazing.

Let’s just state the obvious: The Passport’s dimensions make it among the least pocket-friendly phones on the market. And while it’s steel-I-beam-inspired construction pretty much guarantees it won’t bend in your pocket, that’s not going to be much help if you can’t get it into your pocket in the first place. It’s just too wide to make it into the front pocket of most pants or jeans, and even if you were to cram it in there, its squared-off shape means that it won’t be able to shift around as you move to accommodate standing vs. sitting positions, which most rectangular phones do automatically.

Interestingly, this is the first BlackBerry I’ve ever seen that doesn’t come with some kind of holster or protective sleeve. Maybe BlackBerry figured the Passport was big enough without making it bigger still with an accessory. The bottom line is, if you don’t carry a purse, where the heck are you going to keep this thing? The inside breast pocket of a jacket seems to be the most logical choice, but how many buyers wear a jacket all of the time? 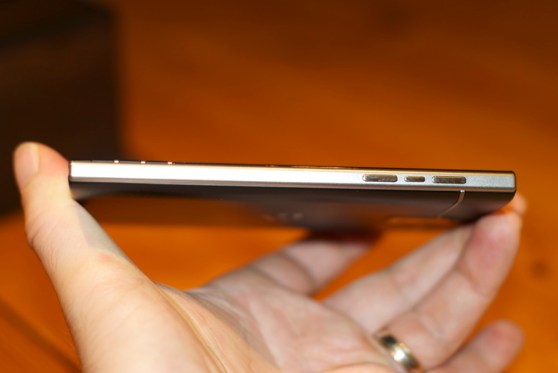 If you like your devices to feel super meaty, the Passport’s curb weight of 196 grams — which is 13 percent heavier than even an iPhone 6 Plus — might be a good thing. However, given how much time we spend holding these things, I’m going to argue that lighter (all else being equal) is better.

So far, all of BlackBerry’s devices that have run BB 10, including the PlayBook, have come with two ports: USB (for data and charging) and Micro HDMI for video output. The Passport is the first to eschew the multi-port design for a single USB-based Slim Port. Slim Port is similar to MHL in that it can use the Micro USB port to output video via one of three available adapters, but it can’t act as a device access link the way MHL does. In other words, you can’t browse the contents of your Passport via your TV’s navigation system. Slim Port certainly works as well as the cable-based solutions that attach to the iPhone’s Lightning dock connector, but MHL would have made a lot more sense.

Yes, I know I put this in the “good” category, but the design is so radical that it may irritate even long-time BlackBerry users. Though the keys are well designed, backlit, and very accurate, there are only three rows, which means there are plenty of times when the OS has to supplement the physical keys with soft keys on-screen. This hybrid approach may be the logical way to preserve as much screen real estate as possible, but from a usability point of view, it’s painful – at least until you get used to it. After playing with the Passport for five days straight, I am still far from used to it. 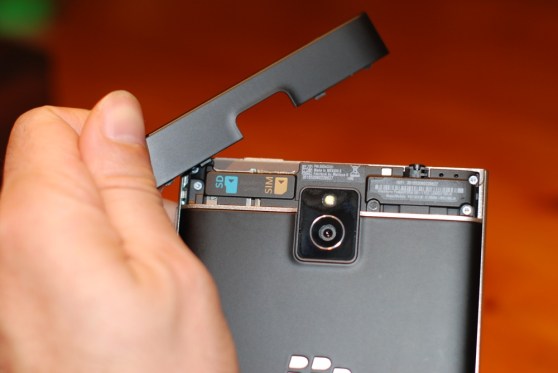 The Passport probably won’t win over many converts from the iPhone or Android camps, but it won’t be for lack of trying. This BlackBerry does more to address the shortcomings of previous handsets than any model so far. The size, shape, and weight will no doubt give many buyers pause, but those who take the plunge will be rewarded with the best BlackBerry experience the company has ever created.