BlackLight Power, one of the more controversial and mysterious cleantech solutions on the market, announced today that it has landed a commercial licensing deal with Maryland-based utility Akridge Energy. This is the sixth such contract for the company, which claims to have technology capable of generating energy using only water.

For background, BlackLight says it lowers the energy level of hydrogen atoms below ground state — something most scientists have deemed impossible. For this reason, many have speculated that BLP’s process is nothing more than an elaborate hoax. But it’s hard to assume false advertising when now six utilities have signed on to distribute the power it creates.

The non-exclusive deal with Akridge gives it the right to use the secretive BlackLight process and some of the company’s technology to provide as much as 400 megawatts of continuous capacity power to buildings in Maryland, Virginia and the District of Columbia. The electricity will be sold primarily to commercial tenants, and will eventually be added to the local power grid, BlackLight says.

Across its previous five licensing deals, the company has given out rights to produce 8,000 megawatts of electricity overall. The utilities in question will technically purchase, own and manage the electricity generated for about 985,000 total customers.

Most of BLP’s investors are undisclosed, but it did receive $10 million from electric utilities Conectiv and Pacificorp, as well as high-profile members of its own board like Shelby Brewer, assistant secretary of nuclear energy under Reagan, and Michael Jordan, chief executive of Electronic Data Systems.

Here’s a simplified schematic of the company’s process: 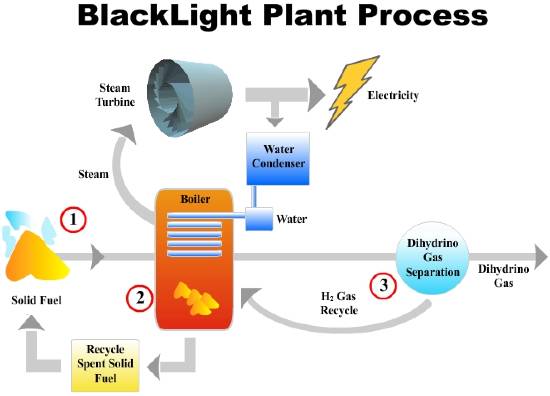