The small game is one of a series of VR experiences being created in the Blade Runner universe by Magnopus, a Los Angeles studio that built the title for the Oculus Rift. It was released on October 19. I went through a hands-on demo of the 25-minute experience and then interviewed Ben Grossman, executive producer at Magnopus.

In this cross between a game and a film, you play the role of a silent replicant whose job is to function as a Blade Runner. The Replicant’s task is to hunt down and kill runaway Replicants for the Wallace Corp., the malevolent corporation in Blade Runner 2049. Sadly, you are not such a good Blade Runner, because you accidentally kill a human for no justifiable reason, mistaking the human for a Replicant. You are sent to the Wallace Corp. Memory Lab, where a woman tries to unravel what happened. Your memory of the events will be thoroughly investigated and scrubbed.

Wallace wants to find out what happened and then erase all of the evidence of what happened. I did this in a step by step process. So you go back to the scene of the crime and study a couple of blocks around the scene. Then you find that false memories have been implanted in your own memory. You have to go back to find out what really happened, and then you look for cameras and other clues that must be sanitized and erased. Yes, you’re pretty much participating in a cover-up.

Grossman explained what I saw and experienced. Here’s an edited transcript of our interview. 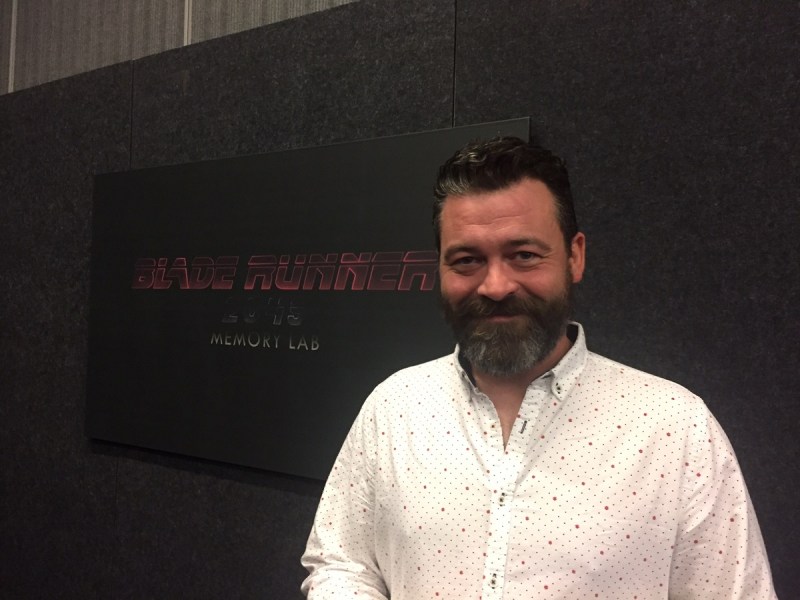 GamesBeat: Are you in Los Angeles?

GamesBeat: What was the genesis of this?

Grossman: Most filmmakers have been excited about the possibility of putting the audience directly into their movies. You very rarely get that opportunity. The original 1982 Blade Runner was one of those movies that so many people have lived in their minds. When Denis Villeneuve’s 2049 was going to come out, Alcon and Oculus got together and approached us to say, “Can we make an experience the audience can get into that’s part of the storyline, not just a marketing piece for the movie?” Something that people can go in to find and explore new stuff and be a part of the story.

Right around that time, Microsoft Holo Capture was just getting out of alpha and being put into the world. We decided to take the last mile integration there and use Holo Cap to capture actors, so it wasn’t just traditional game engine, video game characters. Then we put the audience in there and made a new storyline that explores some of the threads of the movie that haven’t fully been explored yet.

We tried to use new characters that weren’t in the film, so that we weren’t going to — if someone saw the VR experience before they saw the movie, we wouldn’t be giving anything away. There are sets and environments — we worked with the production and got assets and designs from the film. We were able to put those into VR so we could come out as close to the release of the movie as possible. If OC4 hadn’t happened just after the release, we probably would have released the same day as the movie. We haven’t gone live yet. We’ve announced today and we’ll be going live in about two weeks. 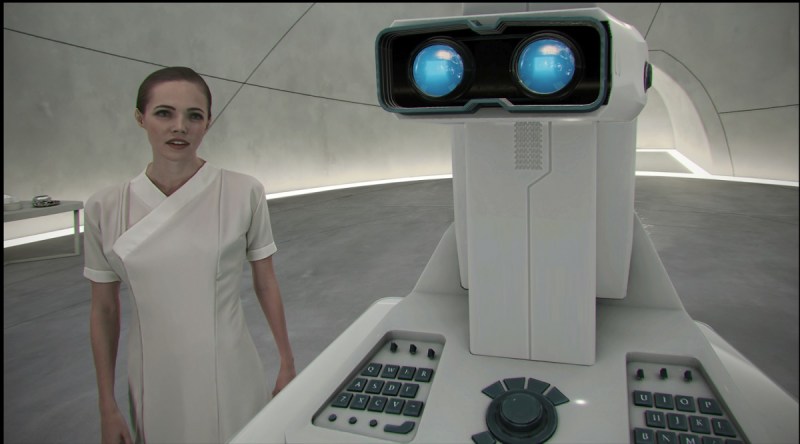 Above: Blade Runner 2049: Memory Lab peels back the layers of memory.

GamesBeat: What was your role?

Grossman: I was one of the executive producers on the VR experience. I’m the co-founder of the developer, Magnopus.

GamesBeat: How much time did you have to work on this?

Grossman: The experience fits into a series. There’s a part one that came out at Comic-Con. This is part two, here at Oculus Connect. There are many more planned for the future. They’ll just continue on in episodic fashion across a bunch of different platforms. The development time on this was about eight months, for this episode. The engineering team varied between five people just working on concept and art, and then ramping up to 15 or 20 when it came to engineering and interactivity and distribution and all that stuff. We’re going to have a one- or two-week delay between releasing the Rift and Touch version and the Gear VR version. We’ll have it across both platforms as soon as possible.

GamesBeat: It’s an exciting IP to get your hands on.

Grossman: Yeah, we didn’t have a hard time convincing the engineers to work on Blade Runner. That much was certain. Everybody has always wanted to be inside that movie, I think.

The idea of being a part of creating that world — like I say, we had many of the filmmakers and producers and key personnel from the film working and testing out the experience and looking at it, but we also even got Doug Trumbull, who worked on the first movie from 1982. We put him in it, put him in the middle of the street, and said, “All right, you’re the only person we know who’s actually been on that movie set from the original movie. What do you think? Did we capture it?” He said, “I’m not coming out.” He sat there for like 30 minutes, just slowly teleported around and looked at everything. We were pretty happy about the level of faithfulness, both to the new movie and the old movie. 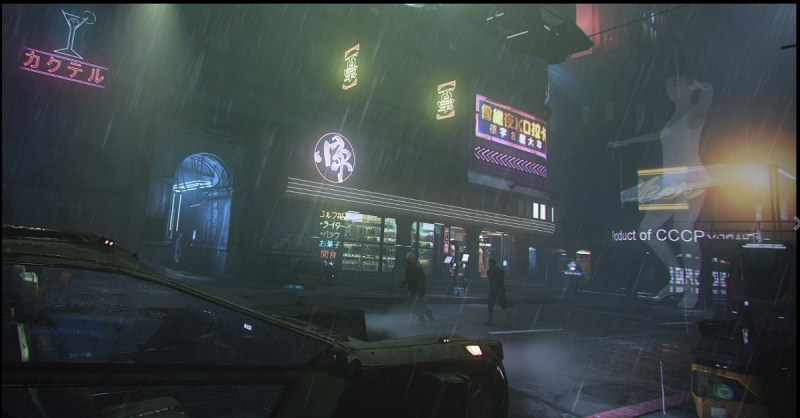 Above: Blade Runner 2049: Memory Lab helps you reconstruct a crime scene and then erase it.

GamesBeat: Did you have any help re-creating that environment, or is built from scratch?

Grossman: It’s built from scratch, but it’s built in collaboration with the production. In some cases we did get lidar scans from the film sets. The Memory Lab is from a lidar scan and photography set that came from the production in Hungary. The spinner does come from photography and modeling from the film. But the street scene was built completely. A lot of stuff had to be modified and optimized, but all the props and stuff are either captures from the film sets or pieces that were created from designs that fit into the film.

GamesBeat: So the electronic cover-up is one of themes from the film?

Grossman: There is a moment of that, yes, and I don’t want to ruin it for you. But we have — some of what you see here has themes that you see in the movie, but this electronic cover-up was also part of the earlier film. The authentication of truth versus fiction is a theme that’s been part of the Blade Runner franchise since the original film. We continued on with that theme. When you have artificial life that so closely replicates humanity, a lot of what’s “real” and what’s “fake” becomes part of what this universe needs to exist. It continues the same themes, but it’s not necessarily a directly lift from the film. 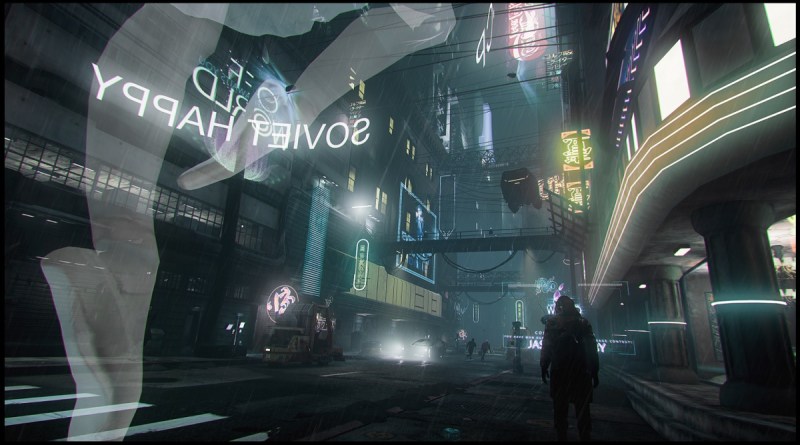 GamesBeat: You didn’t necessarily want to do any action, though? It’s more cerebral, I guess, as far as investigating–

Grossman: Yes. In this case we wanted it to be more about exploration. We felt like there are more than enough first-person shooting experiences in VR. We wanted to start trying to kick down some doors for narrative content. We know that storytelling is a challenge in VR, but stories about exploring may be the new frontier. We set up this story — in the future I think we’re going a lot farther than we have right now. But we set up this story to be something you discover through exploration.

With so many new users, we made it a little bit more — we added more tutorial content than we would have ordinarily liked. But in the future you’ll be able to go into these universes, discover the story by being in it, and follow whichever paths and whichever parts are most interesting to you. There is not one linear storyline. There will be many different storylines overlapping each other you can work your way around. This is the first step of going in that direction and getting people comfortable with those concepts and bringing in users’ feedback.