The Blair Witch Project captivated filmgoers when the indie-produced horror film debuted two decades ago. And finally a game tries to reproduce that horror by taking players back into the fictional Black Hills forest near Burkittsville, Maryland.

Lionsgate, the owner of the film property, and Bloober Team, the maker of horror games like Layers of Fear, made it happen through a happy collaboration. Lionsgate’s executives like Daniel Engelhardt, senior vice president for interactive ventures and games, admired Bloober’s work and wanted to work with the Krakow, Poland-based game studio.

When the teams met, they decided quickly that the Blair Witch property was the right one to pursue. Two years ago, Bloober began work on the game. And now it’s coming out on August 30 on Windows PC and Xbox One. I played a demo of the game at an event in San Francisco.

The game is set after the events of the movie, where a search party has been organized to find a missing child in the Black Hills Forest. As one of the searchers, you go into the forest alone. And the Blair Witch tries to stop you. It is quite scary.

After I played the preview, I did an interview with Barbara Kciuk, writer for the game at Bloober. 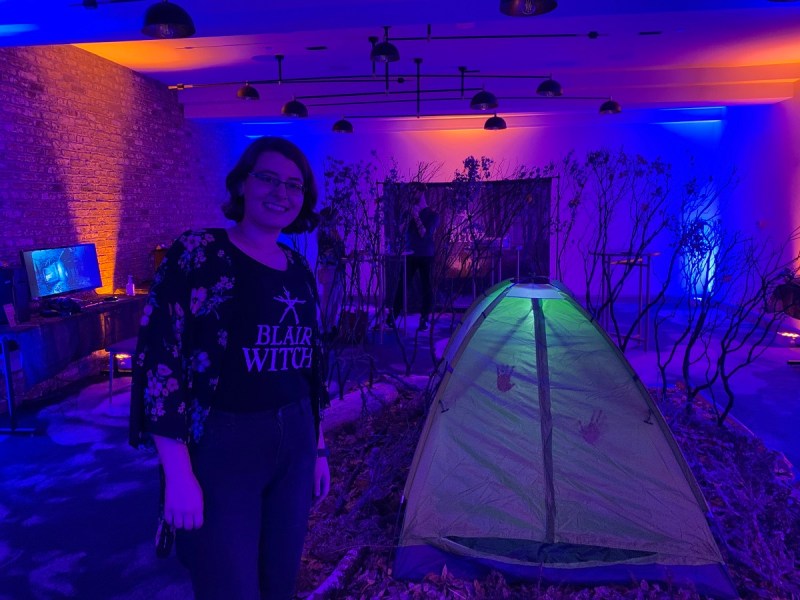 Above: Barbara Kciuk, the writer of the Blair Witch game.

GamesBeat: How did you start thinking about what would be different in the game as compared to the film?

Barbara Kciuk: We believe that you can’t simply take the source material and adapt it to different media. It doesn’t work. They use different methods of expressing the story. For example, Blair Witch the movie uses found footage, and that’s done to shorten the distance between the viewer and the characters in the movie. But in a game that’s not necessary because that distance is already pretty short. You’re playing in first-person and you control the characters. In a sense you are the character. So why use the same method the second time? In a game, working in the camera that way would actually create more distance.

What we believe you need to do is to think about what makes the source material great. What are the themes? You need to find a way to use those themes in your game. What methods does your medium have to convey the same feelings?

GamesBeat: If I remember what was scary about it, it was very minimalist. It wasn’t an active or intrusive kind of horror. It’s just that the woods are scary.

Kciuk: You never knew what was going on, especially if you consider the ending. What’s scary about it is you don’t understand it. You have no idea what’s going on. With the context that the movie provides, it’s impossible to understand what’s going on. That’s one of the things that makes it scary, and it’s also something we want to use in our game. I’m sure you experienced that during the witch house. There were things that aren’t really explained.

If you play the full game, obviously, you’ll understand much more. But not being entirely sure what’s going on is an important part of the game. 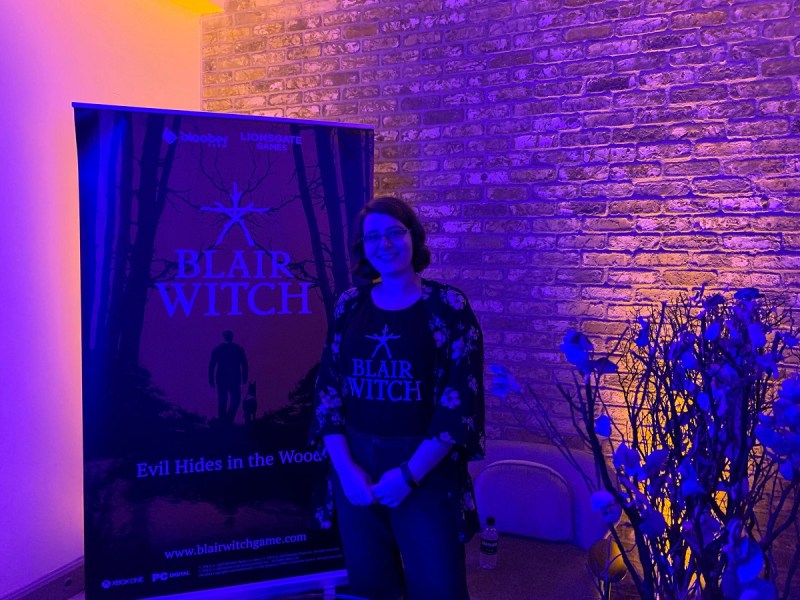 GamesBeat: You didn’t have guns or knives or any kinds of weapons in the game, which is an interesting choice.

GamesBeat: It wouldn’t fit in the movie. It’s not Halloween.

GamesBeat: You can see ghosts or witches here, right? You’ve fit those into the world.

Kciuk: We considered the witch to be — it’s not some big entity you can encounter. It’s not a physical being. It’s more of an overpowering force. This overpowering force has diverse ways of manifesting itself. Sending her minions after you is also something she can do. But it’s not her. It’s just some little part of her powers.

GamesBeat: Your key here is it that you have to figure out what’s real and what’s not?

Kciuk: That’s an important part, yes. In a sense, he’s less susceptible to the witch’s curse because of his past, because he has his own demons. He’s used to those demons. What’s happening to him — he can’t be sure that this is because of some entity, or if this is just because of what’s already happened. 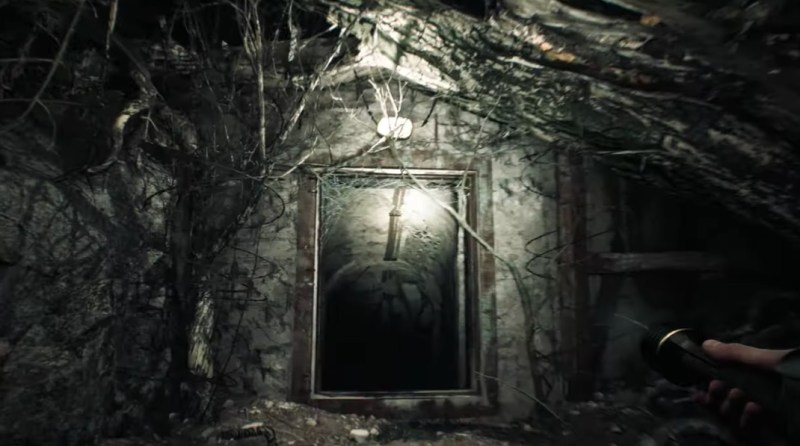 GamesBeat: Is it psychosis, then? He sees things that aren’t there?

Kciuk: I can’t tell you much more because it would spoil things, but in general, his past and exploring that past plays a big role in this game.

GamesBeat: But he’s more likely to believe these things are real.

GamesBeat: Do you run into other characters in the game, like the people you’re searching for?

Kciuk: You probably saw that you have a walkie-talkie and a phone. Obviously there will be a way to contact other characters. There are some characters in the woods you can talk to with the walkie-talkie, while others you can’t talk to that way, but you will be able to see them. Some are totally outside of the woods, so the phone is the best way of contacting them. It all just depends on what character you’re speaking to.

GamesBeat: Does this somehow have some threads back to Layers of Fear?

Kciuk: Not really? We want to put some things in that would seem familiar for players who played Layers of Fear, but we’re not doing it in a shared universe. Each of our games stands on its own. If you played Observer or Layers of Fear, you know that we have this tradition of putting our faces somewhere in the game. In Observer it was a patient card. Here we have those photos. But it’s important that we integrate it into the story. It’s not that it’s there just because we want to be in the game. It feels natural in context and serves a purpose.

GamesBeat: How many hours do you expect this to last?

GamesBeat: It’s a bad idea to get separated from your dog.

Kciuk: [laughs] Yes, it’s a bad idea. He’s very helpful. And he’s so cute. Why would you want to go separately?

GamesBeat: The house — is that representing the ending of the game?

Kciuk: I don’t want to spoil anything. It’s pretty late in the game, yes. In every Blair Witch movie, the high point of what’s happening — there’s a goal you have to achieve. But I can’t tell you whether something happens after that.

GamesBeat: How soon do you think this will be released?

Kciuk: Very soon, August 30. It’s not even a full month away now. We’ve been at work for two years, so we’re pretty proud that we managed to keep it a secret until E3. We were so afraid that it was going to leak. Everything leaked this year. Ninja Theory’s game, everyone knew about that before they announced it. 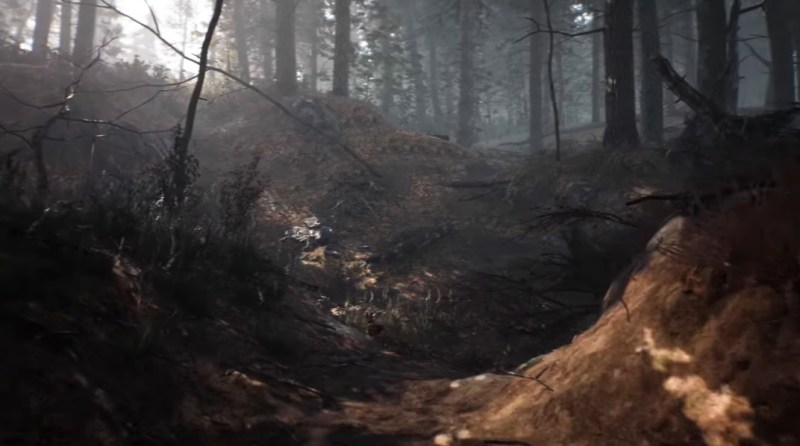 GamesBeat: Did you get much direction from Lionsgate?

Kciuk: They gave us a lot of creative freedom. It was more like swapping visions. They told us what they believed the witch can do, what she is, and we said, “Yeah, we can build on that.” We wanted to add some things, but we wanted to add things that would feel natural for this universe. If it didn’t feel natural, it would break the immersion for the player. We want to expand it in a way that’s rational for this world.

GamesBeat: Is there much daylight in the game?

Kciuk: There is some daylight. [laughs] Time doesn’t really flow in the way it normally does. Daylight and nighttime can swap places very quickly.