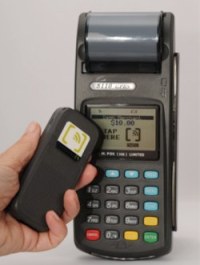 Bling Nation, a Palo Alto-based company, has created a mobile payment service called Redi Pay that lets phone users pay for things in stores with their phones. I wrote about Bling Nation in July, when the company landed $8M in funding $from Lightspeed Venture Partners, Meck and Camp Ventures.

Today, TechCrunch reports Bling Nation has closed another $20M round from London-based Balderton Capital, bringing the company’s total funding to date to $33 million.

Bling’s payment system is one I’m skeptical of, because it requires retailers to install Bling Nation credit card machines in their stores. The devices scan the customer’s Bling info by pinging an RFID sticker slapped onto the back of their phone. Bling takes a cut of each transaction. The company says it is doing well in two small test towns in Colorado, says TechCrunch, because the company can close deals with all the local merchants, making Bling payment locally ubiquitous.

It’s tempting to say Bling’s ability to close deals doesn’t seem to scale. But people laughed at Wal-mart, too.