Doctors making house calls harkens to an earlier time, or at least not 2015. But with the rise of on-demand services, it was only a matter of time before medical professionals started taking their practices on the road.

Founder David Schafran comes from a family of optometrists. His father has been testing eyesight at a shop down on the corner of Nassau and Fulton, near the World Trade Center complex, for 30 years.

Schafran himself is not an optometrist — he said he had bigger ambitions than running his father’s practice. Those aspirations took him to work on product strategy at Intuit and also led him to incubate some of his ideas at the MIT Media Lab. Though he’s been steeping in the tech world, Schafran ultimately found himself back at eye care.

“Unfortunately, the eye care world hasn’t really evolved in the way that other technology in other industries has,” said Schafran. While on-demand services are proliferating, eye exams and eyewear have been stuck inside the storefront model, largely because of the size, heft, and expense of the tools required to test someone’s vision.

Schafran realized that cellphone technology had advanced enough that it could serve as the backbone of a portable vision testing kit. By pairing a cellphone with a couple of plastic headset-like devices, Schafran was able to create three very sophisticated instruments: an autorefractor, which objectively measures your eye’s refractive error; a lensometer, which verifies an eyeglass prescription; and a phoropter, which is used to determine your eyeglass prescription. The result is a HIPAA-compliant, on-demand, augmented reality eye exam that you can take at home. 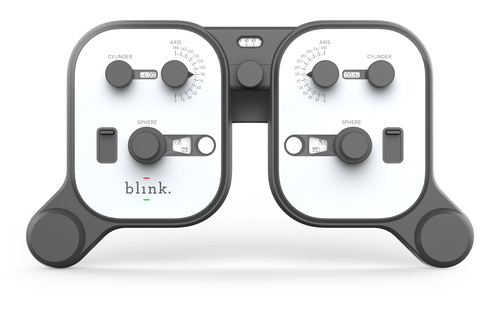 Blink works like any other on-demand service: You book the appointment and then a professional meets you at your home to deliver the service. Schafran said Blink spends a lot of time vetting and training its “visioneers,” the people who administer the vision test. So far, there are just six people trained. After you’ve taken the test at home, the visioneer sends your test off to an optometrist, who evaluates it and gives you your prescription. You can take that prescription to any eyeglass purveyor you like. If for any reason, the optometrist suspects there’s a more serious health concern, he or she will recommend a local optometrist with whom the client can get a more in-depth eye examination.

Schafran said the model is also good for optometrists. They can evaluate eye exams when they’re not taking appointments, adding another source of income to their business.

Blink’s service costs $75 per exam, and it does not currently accept health insurance. The service gives discounts for group exams (i.e., an appointment for two people in one location costs $130; for three people the total is $170).

At the end of the day, Schafran said, Blink is intended to lower the barriers to getting an eye exam for the 75 percent of Americans that need vision correction. Considering that not too long ago, eye exams and other medical checkups were routinely done in the home, Blink seems like a natural fit in the on-demand marketplace.