Blippar has amassed a big audience of people who are using smartphones to engage with augmented reality apps using real physical products. Now it is extending that platform to Google Glass, creating a new way for developers to create augmented reality games. 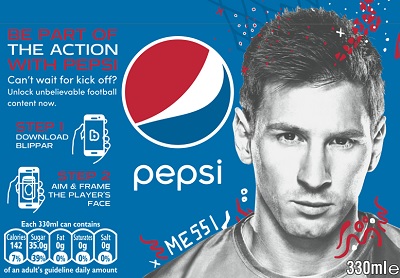 Above: Pepsi links its cans to the Blippar smartphone app.

Ambarish Mitra, the chief executive of New York-based Blippar, is revealing the new Games for Glass platform today at the Augmented World Expo, a trade show for augmented reality in Santa Clara, Calif. These games could activate when you look at a can of Pepsi and use Glass to interact with it. For instance, when you look at the can’s soccer Blippar-enabled ad, an app will activate where you could use your eyes to aim a soccer ball at a goal and then kick it. In essence, the ad on the can in the physical world activates a digital augmented reality app that interacts with the can.

Blippar will release its software development kit (SDK) for Games for Glass in about six weeks. At that point, developers will be able to make games that take advantage of Google Glass and its ability to overlay virtual images on top of the real world. You can, for instance, toss some virtual paint at an object in the real world. When another person uses the Blippar app for Glass comes by, they will see your markings when they look at that object with Glass.

“With augmented reality, we can become the bridge from physical to digital,” Mitra said in an exclusive interview with GamesBeat. “To marketers, the physical world is bigger than ever, even with the growth of digital. Blippar is effectively like a browser that brings the physical world to life. It triggers something in the physical world.”

For the past three years, Blippar built itself up as a platform for image and object recognition, identifying objects in the physical world by comparing them to data in the digital world. Earlier this year at the Mobile World Congress event in Barcelona, Spain, Mitra unveiled the Blippar app working on Google Glass. Now he is adding the ability to create interactive games with touch or gesture-recognition technology. 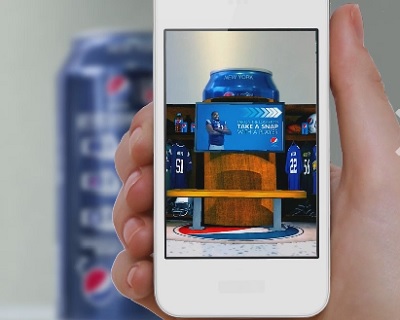 Above: Blippar on a Pepsi can.

Besides the paint demo, Blippar has also created a simple game dubbed 3D Asteroid. In it, you look through the Glass display and see asteroids coming at you. By touching the bar on the side of Glass, you can shoot the asteroids. You aim by changing where you are looking.

Glass may be a limited market for now as Google is charging $1,500 for the early versions of Glass. But Mitra sees great potential in the future and believes that games for wearable devices are a natural testing ground for innovation.

More than 3 billion products have the Blippar logo, including 100 million pages of print, such as magazines and newspapers. Those Blippar apps have done so well — getting more than 6 million users a month — that the company has grown to more than 130 employees.

“This is generating a huge amount of business, and we are one of the most profitable augmented reality companies in the world,” Mitra said.

With a can of Pepsi, you can fire up the Blippar app on your cell phone. Then you point it at the logo on the can. Then your smartphone screen will activate an interactive game where you can kick soccer balls into a net. Mitra said the engagement on these apps is normally a couple of minutes. Mitra said other applications include coupons based on location awareness or magazines where a user can get more information about a story or watch a video related to it by using the Blippar app.

That costs a lot less than a TV commercial yet lasts longer. On top of that, since the app is played on a smartphone, the activity can be measured. Pepsi knows how long a person played for as well as the person’s location, taste in apps, and basic demographic profile.

Rivals include Mind Pirate, which has launched its own game platform on wearables such as Glass.

“This is getting so popular that Blippar has become a verb,” Mitra said. “We want to make the whole world blippable.”

The applications will go beyond games. You could, for instance, leave a message on a door of your apartment for your girlfriend using Blippar, where the message will only be visible if she looks at the door with Glass.

Over time, Mitra would love to create the technology that becomes the foundation for the kind of experience actor Tom Cruise had in the sci-fi film Minority Report, when he went into a department store and it greeted him by name and offered him a personalized bargain. 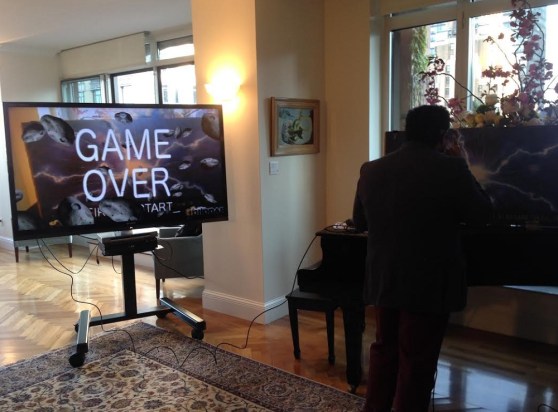 Above: Blippar game on Glass demo