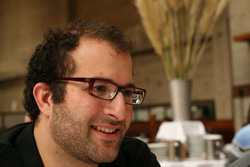 Earlier today, VentureBeat broke the news that some members of Blippy, a social-sharing site for shoppers, had their credit card numbers published to Google by Blippy’s servers.

Blippy cofounder Philip Kaplan, known to Web 1.0 oldsters as Pud from FuckedCompany, sent us the following response, which we quote in full:

“Today someone discovered a Google search that displays the credit card numbers of 4 Blippy users.

“We take security seriously and want to assure Blippy users that this was an isolated incident from many months ago in our beta test, and doesn’t affect current users.

“While it looks super-scary and certainly sucks for those few people who were affected, and is embarrassing to us, it’s a lot less bad than it looks.

“Here are the details:

“While we take this very seriously and it is a headache for those involved, it’s important to remember that you’re never responsible if someone uses your credit card without your permission.  That’s why it’s okay to hand your credit card over to waiters, store clerks, and hundreds of other people who all have access to your credit card numbers.

“We’re making efforts to bolster our security to ensure that nothing like this ever happens again.  That includes third-party security audits, and in general being a lot more careful before new features are released, even if it’s during a small, limited beta test period.

“Thank you for reading.”