Blizzard Entertainment just celebrated a historic milestone — its 25th anniversary. From humble beginnings as a company porting games to the Amiga to developing some of the world’s most popular real-time strategy, massively multiplayer online, and collectible card games, Blizzard has grown into an iconic cornerstone of the entire gaming industry today.

How successful is Blizzard? It has over 4,000 employees, and it generated $1.6 billion in the 12 months that ended September 30 — with $592 million in profit. It is one of the crown jewels of the American game business, and its StarCraft, Warcraft, and Diablo brands are known throughout the world.

GamesBeat talked with Mike Morhaime (CEO), Chris Metzen (VP , creative development), and Frank Pearce (senior VP) to ask them about Blizzard’s 1991 roots, some of the tremendous successes along the way, and where they see themselves headed as they continue to grow.

But I really wanted to talk to these three about something a little closer to home — the incredible communities that have grown around Blizzard’s games and, subsequently, the phenomenal position it is in to further diversify its reach with esports.

A little backstory: I grew up on Blizzard’s games. From the original Warcraft: Orcs and Humans on, one (or more!) of Blizzard’s games has been my go-to choice for my free time for 20-plus years. My intense interest in the games that Blizzard has produced over the years has led me to surreal opportunities — a World of Warcraft community that has since become the basis of dozens of my most meaningful friendships, a career in esports, and even the chance to man the desk as a caster for Blizzard’s Hearthstone esports scene.

When I talk to Blizzard staff now, they’re people I share a common goal with — we all want the games, the communities, and the competitive scenes to succeed. We’re all working toward the same objectives, just from different angles. So to talk to these three about not only how far Blizzard has come, but how much further they want to go, was cool — but I really wanted to know more about the why than the how. 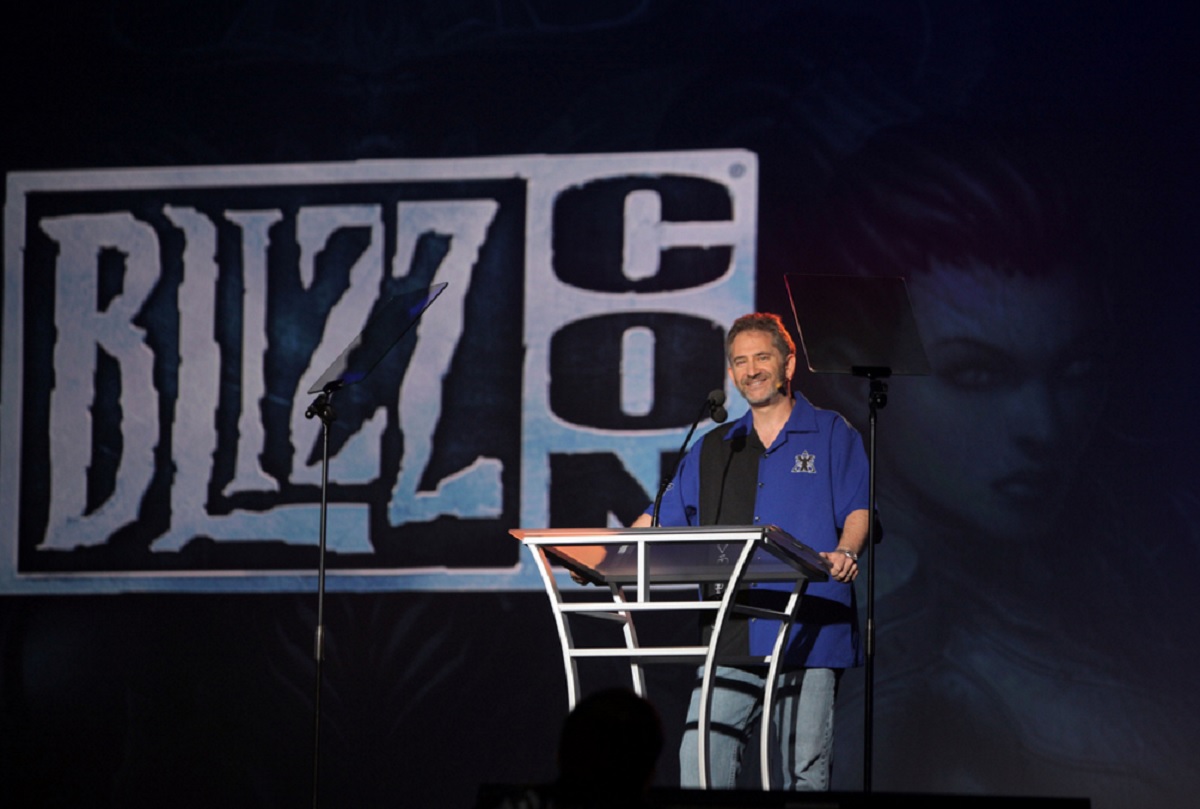 Above: Mike Morhaime, CEO of Blizzard Entertainment, in 2011.

While everyone had their own perspective on the subject, the thing that stuck with me the most was what Morhaime had to say when I first got to sneak the subject of esports:

“One of the challenges [in esports] is to really humanize it and get to know the players more– that’s where you really start forming an attachment and have people to root for,” Morhaime said. He draws the comparison to the Olympics, where despite including many sports or events that aren’t necessarily tremendously popular outside of the Olympics themselves, the human stories that are being told really help give players and teams an identity.

Morhaime’s been vocal in the past about wanting to see gaming become a more positive space — he even took a hard-line on harassment during his opening remarks at BlizzCon 2014. In every conversation I’ve ever had with him, he always seems genuinely excited to see people be happy, whether by enjoying a game his company has made, following its competitive esports scene, or meeting someone through one of their many communities.

Pearce had a lot to say about the importance of a name: Blizzard Entertainment. It wasn’t the Blizzard part he emphasized, though.

“When we chose to name the company Blizzard Entertainment after we’d gone through other choices that didn’t work out as well. The choice to say ‘Entertainment’ was conscious,” Pearce told us emphatically. “Not ‘Studios’ or ‘Games.’ Even way back then, before we had shipped [WarCraft] Orcs and Humans, we believed that we were going to be creating franchises that would be leveraged for far more than just games.”

I really “met” Pearce at BlizzCon 2014. He was waiting in line to buy one of Blizzard’s World of Warcraft 10th Anniversary Thunderbrew Brown Ales (I still have one — hanging on to it for a special occasion!). It didn’t seem many of the people there recognized him, but I did — and offered to buy him that beer. We talked for quite a while about the company and all of the wonderful memories they’ve been able to create, and listening to him tell the story above about choosing the name made me feel like somehow, deep down, they’ve always known what a powerful effect their games could have on people’s lives.

(We alluded to this story in our interview with Pearce, because I told the other GamesBeat folks about it before we got him on the phone, but I sadly didn’t get to tell it again in our brief time with him. Frank, if you see this — that beer was worth every penny.)

If the culture Blizzard wants to build has a personality all its own, it’s either Chris Metzen, or it’s written and voice-acted by Chris Metzen. The guy oozes pure svelte geek, and he’s the consummate representative of the raw excitement and chemistry that permeates Blizzard’s culture.

He compares Blizzard’s ups-and-downs to being part of a band — an allusion that is perhaps more allegorical than he realizes. “In a weird way, we are like a giant, giant rock band,” he says. “If we stumble, or have blown it, or are forced to cancel a game, it’s because we aren’t feeling it.” Nothing about these setbacks phases him. “We are a strong team. We pull together, and we hit it out of the park on the next one.”

I dig his theory. Then again, I do have the band’s whole discography.

One of the last things he said goes down as quotable quote of the day, though: “We want everyone to come to this weird, big, geeky pool party.” 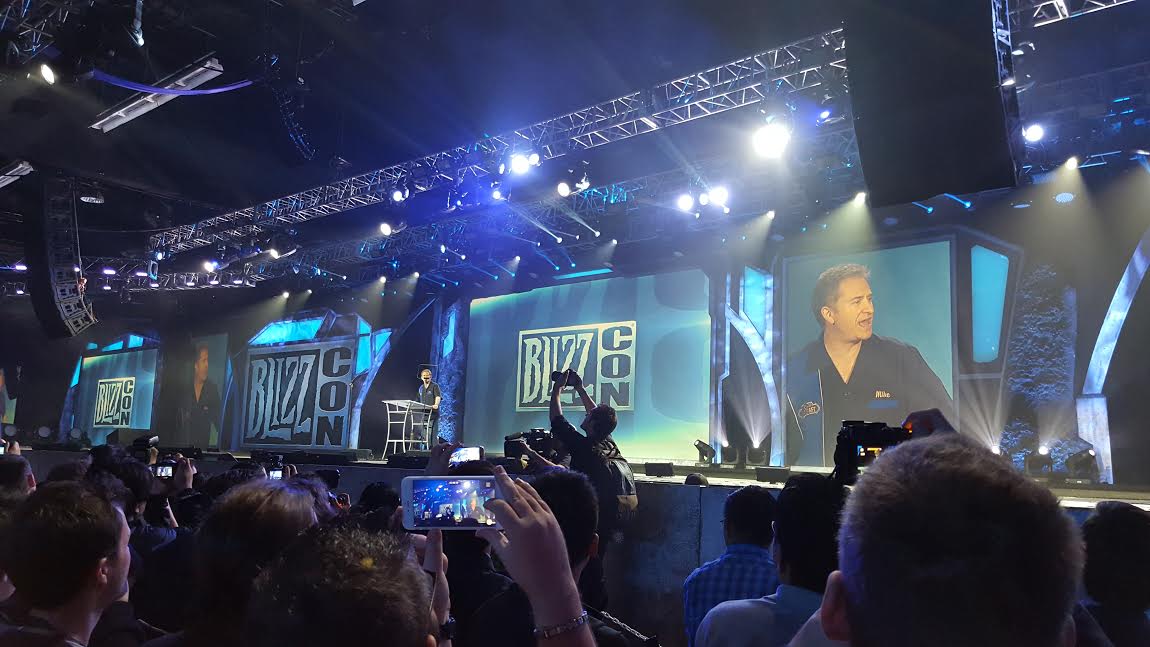 We talked about lots of things — the cool community influencer summits Blizzard holds, the changing landscape of cool gaming tech, and more. My job, such as it is, was to try to eke out some nugget of information — get the “scoop,” as it were.

From my perspective, this was a rare opportunity to just show some appreciation for the phenomenal, life-changing scope of what these men — and Blizzard as a whole — have accomplished. Gaming has shaped an entire generation, and this company has grown from three guys doing their thing in a space the size of a bedroom to the fifth largest game publisher (as Activision Blizzard) over these 25 short years. (If you discount Tencent as a “holdings company” and remove hardware developers, they’re the biggest development company in the industry.)

The impact, though, isn’t necessarily about revenue streams or stock values. These matter in a board room, certainly, but when you talk to Morhaime, or Pearce, or Metzen, you don’t hear that stuff — you hear how proud they are of the community they’ve built. They’re trying to run a business, but I think there’s still a heart at the middle of all of this that pulses purely for the sake of making something that will be shared by families, friends, and friends you just haven’t met yet.

I attended my first BlizzCon because I was trying to find something to do with my sister before she left for university, and playing Blizzard games — especially World of Warcraft — was one of the things that we had most in common. We have long-running family jokes based on a macro I made to demand she Innervate my Priest in back in 2005.

I have a network of friends that spans the whole world from World of Warcraft communities like the old Elitist Jerks forums. I’ve met people that I’ve shared unparalleled experiences with attending StarCraft tournaments. These aren’t “avatars” or “toons” — they’re real people that encourage, support, and love each other, but would never have crossed paths were it not for a Blizzard game.

My experience is not unique. Thousands, if not millions, of people worldwide can tell their versions of the same stories. Guild get-togethers; beautiful marriages; friendships that span the globe; these are all dreams made possible by the dreams of a punk rock game band laying down tracks in their garage.