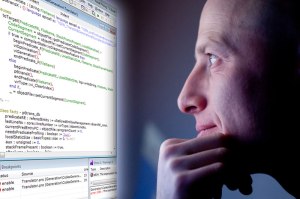 Can’t code? Want to learn? Fortunately for you, you’ve got a few online options.

During your training, you get placed with a group of 14 peers and one mentor. You get to work on honest-to-goodness web apps rather than dead-end programming exercises, and you’ll be trained in HTML, CSS, Javascript, Ruby, Rails, Git, and more. (The company says web design and iOS bootcamps are coming soon).

The training includes one-on-one Skype chats with your mentor as well as code reviews and “office hours” when you need extra help.

The company’s first cohort of students has now officially graduated, and they’re ready to show off their wares. For the most part, Bloc’s first group of students were would-be founders who lacked technical skills of their own and who were understandably having a hard time recruiting cheap, available technical talent in the current market. Here’s an example:

Arun Gupta, the former co-founder of Wakemate.com and an undergraduate student at Yale, had limited technical background but a desire to build an application for applying Instagram-like filters to photos that he already had uploaded on Facebook. Airbrush.io was finished in 6 weeks as planned, and Gupta says he’ll charge users to order prints of the new photos after they’ve been edited.

Of course, all that glowing success doesn’t come without a little pain; it is a bootcamp, after all. As the Bloc site says, “We’ll be pushing you to the very edge of your learning capacity. … We try our best to evaluate your commitment and determination level through the application and interview stage. We don’t want students to fail, but we realize that some won’t be determined enough to finish.”

Also, Bloc will hurt you in your general wallet-type area to the tune of $3,500 for the course (you can get some or all of your money back if you end up dropping out). Still, the accelerated schedule and hands-on coding experience are well worth the pricetag, which is still a fraction of what you’d pay to learn how to code in a traditional college classroom.

In some ways, the product reminds us a little bit of Codecademy, another company we’re particularly excited about. The difference is an interesting one: Codecademy’s lessons are easy to digest and friendly for just about anyone to pick up; they’re free; and you can work at your own pace. Bloc, on the other hand, demands a lot more commitment but can turn around much more dramatic, practical results, especially if the learner in question needs a little extra motivation.

*Correction: We originally stated that Bloc was a Y Combinator startup. While Bloc co-founder Jared Tame is a YC alum, Bloc itself has no connection to Y Combinator. We regret the error and are adding extra floggings to Ms. O’Dell’s weekly quota.