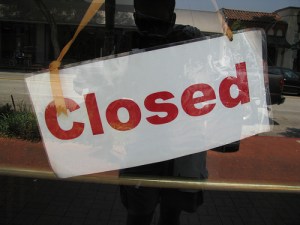 Blockbuster just might be on the ropes. The Dallas, Tex. movie rental chain said in a recent SEC filing that it may not be able to make good on some of the performance-based stipulations for an outstanding loan. If the rental giant isn’t able to secure the $250 million in loans it needs to survive, then its auditors say there’s “substantial doubt” about whether the flailing company can stay in business.

The news isn’t too surprising given Blockbuster’s recent performance. The rise and subsequent success of DVD-by-mail company Netflix has undoubtedly eaten away at Blockbuster’s revenue. And though Blockbuster executives have repeatedly mocked Netflix for its business model, the company has had to change its stance by launching its own DVD-by-mail service (and price war) alongside its retail stores. Recent ventures like a failed set top box for on-demand movie downloads don’t bode well for the company’s vision either.

But Blockbuster’s true problem is its mounting debt. The company has become dependent on a revolving line of credit to stay afloat, and just last week the rental chain negotiated with its creditors for leniency given the economic downturn. Today’s red flag stems from Blockbuster’s auditors, who have voiced doubt over the company’s ability to continue operating after examining the books from last fiscal year.

For what it’s worth, the company remains optimistic. It even had the common sense to predict auditors’ reactions and the subsequent fallout. Does that mean Blockbuster still has a fighting chance? Possibly. But, it seems much more likely that the days of “making it a Blockbuster night” are nearing their end.