Blockspring, the Andreessen Horowitz-backed “do anything with a spreadsheet” startup, is announcing an integration with Slack that will allow noncoders to make their own Slack bots that can do real work, as part of Slack’s own announcement of enabling their API for adding slash commands.

Blockspring essentially enables any spreadsheet user to pull data feeds from the Web into their sheet with zero coding knowledge. Now, Excel ninjas are coders in their own right — using the world’s most popular, albeit limited, coding language. Blockspring opens the doors for more traditional software architecture to be sort of “added to” Excel (or Google Sheets), such as layering data feeds on top of one another, and makes it easily accessible to the billion-plus spreadsheet users around the world.

So, how does this work with Slack?

“What we realized was a lot of API requests are way too complicated to create all these different Slack bots for,” Blockspring CEO Paul Katsen told me. “Let’s say you want a bot to give you a Google Analytics report, like the number of users hitting your site in the past month. To do that, you’d have to try to have a conversation with a bot that’s trying to be human-like. We realized that doesn’t really work. Rather, people should be creating their own customized commands through a single bot that can do anything. So rather than having a special Google Analytics bot, you can just tell Blockspring Bot to go get the Google Analytics data (or any other data feed) you want.”

That’s actually pretty cool. Here’s what it looks like: 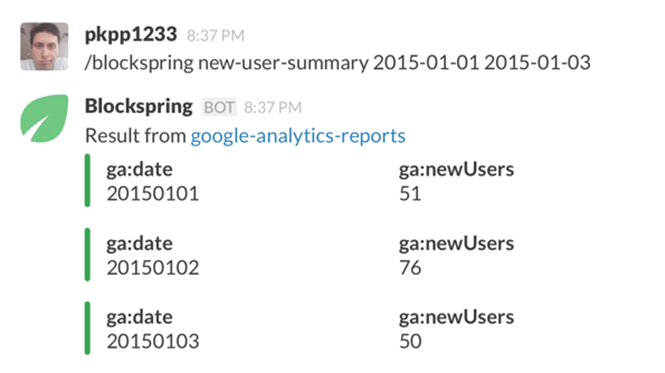 Above: Screenshot of sample Google Analytics report shown in Slack via Blockspring Bot.

What Blockspring for Slack essentially does is provide a single bot to bring all of your teams’ services to you, rather than the other way around. And it’s all through one command, “/blockspring.” So as a support agent, you could send a text message to a customer based on their question through a Twilio integration. Or here’s another one: Set up a custom Facebook Insights report retrievable through Slack in less than 60 seconds. Blockspring Bot doesn’t try to understand your natural language like most bots. Rather, it lets you configure what your command will look like and completely customize how it will act.

Blockspring says the average Slack user spends 2 hours a day in active conversations in Slack. It’s nifty you can order your lunch through Slack with a bot (or any other number of cute commands), but that’s not what I’d call a revolutionary productivity gain. But what if you could get web traffic data on your competitors right in Slack while chatting with a teammate? Just hit the “add to Slack” button for whichever API you want to add in the Blockspring console, and you’re on your way. 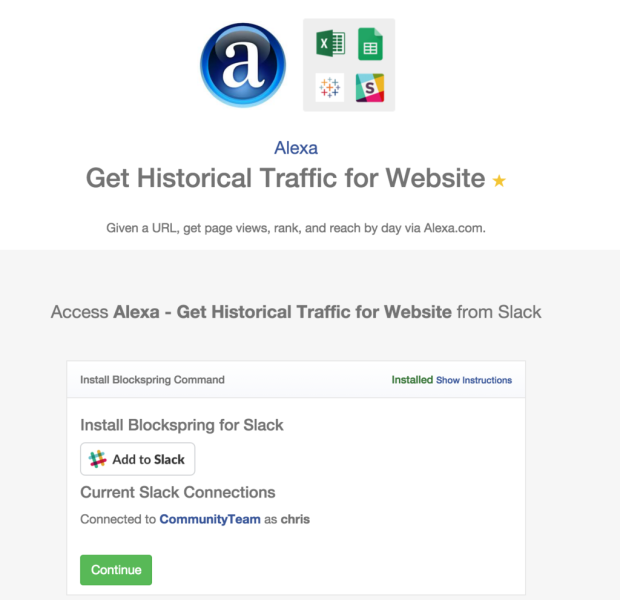 Using Blockspring, you could even run some of your most common HR and training questions right in Slack. Train your team to ask /blockspring in Slack their questions, and Blockspring can check a source spreadsheet through a simple VLOOKUP function to spit out the answer. That can save some serious time at scale.

Above: Blockspring’s “question and answer” module in Slack, where the top of the image is the source spreadsheet for the Slack command below it.

Whether or not Slack will fulfill its promise to revolutionize the way we work remains to be seen (and that’s being kind). Integration with real work tools — like Blockspring — to take any data feed from the Web and bring it right into Slack is a start. Maybe even that’s optimistic. But there are really cool use cases with Blockspring that actually make sense for doing actual work (i.e., not ordering a Lyft through Slack).