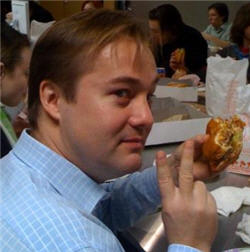 The baby-faced, fast-talking entrepreneur, who edited Silicon Alley Reporter during Web 1.0 and sold Engadget and some other blogs to AOL for more than $25 million in his Web 2.0 comeback, lacks only one thing to make him a star business pundit: An editor.

VentureBeat can help here. Jason, here’s my rewrite of your blog post today about why Yahoo’s search deal with Microsoft is a suicide move:

“Yahoo was once the No. 1 search site on the Internet, but no one remembers now. That’s because the company farmed out its search engine, the core of its brand and largest source of its traffic, to upstart Google. Yahoo’s increasingly cluttered home page shooed Web users away to the faster, cleaner Google interface which delivered the same search results more quickly and effectively.

In 2009, Yahoo didn’t need to make the same mistake again with Microsoft. In fact, it’s Microsoft that needs to grow the audience for its expensive Bing search engine. Instead of outsourcing, Yahoo should have done what Microsoft did: Acquire a bunch of core technologies and build a Google rival. But no, Yahoo took their eyes off the prize by ceasing to innovate and trying to bizdev their way to success. That’s why the founders of Flicker and del.icio.us, prize Yahoo acquisitions of innovative Web 2.0 sites, have left the company, as did chief scientist of search Marc Davis last week. Microsoft, meanwhile, invested in building the search engine Yahoo should have developed.

Carol Bartz is a competent dealmaker and operator, but not a product genius like the Google kids. Without innovation, Yahoo will now die on the vine. The End.”