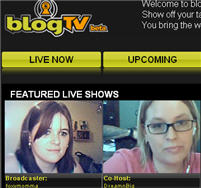 BlogTV, a popular video streaming company in Israel, has launched an application on Facebook. Separately, it plans to soon enter the U.S. with a mobile phone version.

BlogTV launched in the U.S. in June, but its mobile application has been used in Israeli for two years. It is notable because its already carried on all of Israel’s carriers. People are streaming video of themselves live to their friends via their cellphone — something that you won’t see in the U.S. because carriers here have been slow to introduce high speed mobile networks. However, Edge and other advances have encouraged BlogTV to consider entering the U.S. more seriously.

BlogTV got $3 million last year from its corporate parent, Tapuz, a publicly traded Israeli Web portal. BlogTV is now a spin-out, and is looking for its next round of capital, in part to market more in the U.S., founder Nir Ofir tells us.

The image above shows two users of BlogTV’s popular co-hosting feature, where a broadcaster selects a partner to stream a show together. Viewers can comment and chat on the videos, and of course it offers a widget. The company’s software can downloaded on to phones.

The company is comparable to other live streaming companies, such as Stickam and Ustream, which also have applications on Facebook.