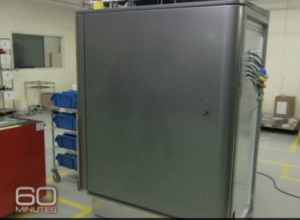 Bloom Energy finally emerged from stealth mode, unveiling its “Bloom Box” fuel cell during a 60 Minutes segment with Lesley Stahl yesterday (click here for bonus videos). Capable of powering more than 100 homes while producing close to zero emissions, just one of these boxes could radically alter how people get their energy. But is it the godsend that some are saying it is?

Wireless and neatly compartmentalized, the Bloom Box could one day be a fixture in your backyard or basement, transmitting clean energy to your home as needed, Bloom CEO K.R. Sridhar says. Right now, it’s available on a large scale, with each box costing as much as $800,000. In the next five to 10 years, Bloom says it will release smaller boxes for individual households costing less than $3,000. If this happens, there is a chance that Bloom Boxes could supplant utilities and long-distance transmission lines — not to mention capital intensive wind farms and solar arrays.

Bloom investor John Doerr of Kleiner Perkins Caufield & Byers, who played a big role in last night’s 60 Minutes debut, says it is definitely Bloom Energy’s goal to disrupt, and even replace the country’s electrical grid. This is a bold assertion, considering how much time, effort and money is being sunk into the creation of the so-called Smart Grid. Incidentally, Bloom Energy was Kleiner Perkins’ first investment in the green sector, which has now become a huge area of focus for the firm. Since then, former Secretary of State Colin Powell has also joined the board of directors.

If this doesn’t inspire confidence in Bloom’s lofty claims, its roster of current customers probably will. Google was actually the first to install Bloom Boxes on its campus 18 months ago, followed soon after by eBay, FedEx, Wal-Mart and 16 other big names. EBay CEO John Donahoe gave the Box a strong endorsement last night, reporting that the several fuel cells it installed nine months ago have already saved the company $100,000 in energy costs — and are putting out five times more energy than its extensive rooftop solar system.

Last night also marked the first glimpse anyone has gotten at Bloom’s actual technology. Each Bloom Box is filled with stacks of razor-thin discs made out of baked beach sand and coated with green and black proprietary inks (this component remains secretive). When the Box is infused with a source of fuel, whether it be natural gas, biomass-produced gas or even solar energy, each of these discs puts out enough electricity to power a light bulb. Together, they can light up whole city blocks. The design was adapted from a similar product that Sridhar worked on at NASA.

As Greentech Media editor-in-chief Michael Kanellos pointed out during last night’s segment, previous attempts at similar fuel cells have been prohibitively expensive — especially when it comes to scaling the technology. But Bloom’s Sridhar says it has dramatically reduced the costs associated with building fuel cells. Not only does it use a cheaper metal alloy between each of its discs instead of the typical platinum, but it has replaced the expensive, pure hydrogen gas that used to be required, with more plentiful gas-based fuels. The bigger problem might be that the company only has the capacity to build about one box per day after raising upwards of $400 million.

After letting Sridhar sing his Box’s praises at the beginning of the segment, 60 Minutes correspondent Lesley Stahl turned to potential problems and challenges. Notably, if the Bloom Box becomes available (and affordable) for average consumers, won’t threatened utilities start to push back? Sridhar and Doerr have foreseen this problem and reasonably argue that utilities could become major Bloom Box buyers themselves, selling the power the Boxes produce to their residential and commercial customers. After all, utilities already buy wind farms and nuclear reactors to do the same.

Stahl also called attention to some of the technical difficulties existing Bloom customers have encountered. For instance, early on, one of Google’s Bloom Boxes used to power a data center abruptly shut down. Sridhar admits that not every Box has performed perfectly and acknowledges that several Boxes have had problems with air filter clogs. But he maintains that the technology is still being refined, and that the early adopters are playing an important role in providing feedback and making the product more commercially viable.

Kanellos provided perhaps the most salient counterpoint: Companies like General Electric and Siemens have been working on their own fuel cell models for decades. If Bloom Energy succeeds as widely as Sridhar and Doerr say it will, what’s stopping these bigger players from investing their immense capital in developing their own branded solutions? Kanellos articulately framed this issue, agreeing that fuel cells may indeed become a staple in household basements in the next decade, but that they’ll bear the GE logo, not Bloom’s.

Even after shedding some mystery, Bloom still seems to hold an amazing amount of potential. It will be interesting to see which companies sign up to be in its second flock of big-name customers. At what point will it begin to approach major utilities as potential buyers? And what will happen to fledgling competitors like home fuel-cell maker ClearEdge Power? Will Bloom’s technology be adapted for automotive applications as well? Could it revolutionize the developing work with off-the-grid electricity? There are many more questions yet to be answered, but for now, it looks like Bloom deserves all the buzz.

So that you can decide for yourself, here, in full, is the 13-minute segment that aired on last night’s episode of 60 Minutes with Lesley Stahl: