Twitter and Bloomberg are taking their existing partnership to the next stage today, as the companies reveal that more Twitter data will be integrated into Bloomberg’s financial platform.

The Bloomberg Terminal is a service offered to companies seeking access to Bloomberg’s real-time financial market data. Back in 2013, the U.S. Securities and Exchange Commission (SEC) declared it would let companies make corporate announcements through social media, and given that such disclosures can impact financial markets, Bloomberg swiftly announced that it would begin pulling live Twitter feeds into its terminals.

The extension to the agreement will involve “significantly increasing” the available Twitter data through Bloomberg’s terminals and improving the alerts through the Bloomberg Social Velocity tool. BSV is used when a sudden increase in conversations happen around a specific company, which may indicate something big is about to happen. BSV basically scans tweets and StockTwits for “cashtags,” which are “$” prefixes that indicate the content relates to investment and trading news.

Bloomberg’s customers will now be able to view a live feed of financial tweets curated by Bloomberg, with sentiment analysis and the ability to “graph historical Twitter volume related to securities or topics,” as Twitter put it. More features are planned for the future, too. 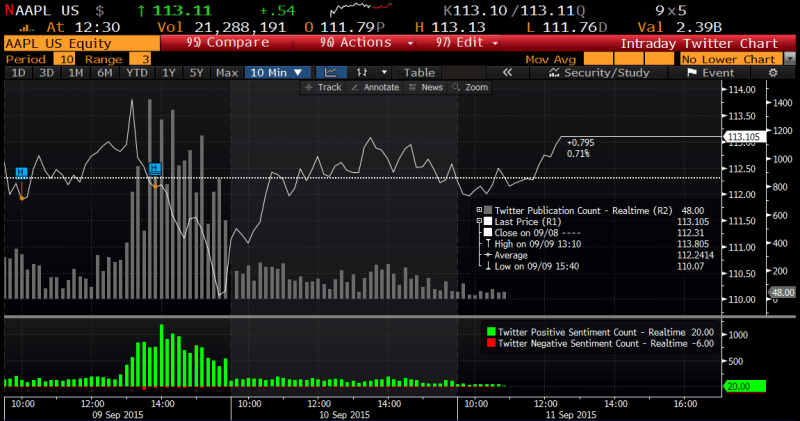 “Our customers have told us that Twitter helps them uncover early trends, breaking news, and sentiment shifts, which may be indicative of changing market conditions,” said Ben Macdonald, global head of product at Bloomberg. “By incorporating real-time information from Twitter into their workflow, Bloomberg makes this data accessible and discoverable so that our clients can react quickly to important news and trends.”

The new offering for Bloomberg Terminal users is enabled by Gnip, the data startup Twitter acquired last year that made a name for itself by harnessing and selling Twitter data to companies. Today’s news comes a little over a month after Twitter revealed it was opening access to every historical public tweet through a full-archive Search API for Gnip customers.