Blue Jeans’ corporate goal is to provide a billion minutes of videoconferencing. Today, the company is a little more than halfway there.

Clearly, however, the company is impatient. 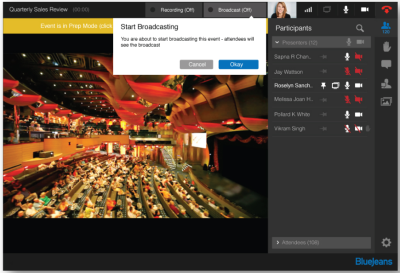 Today Blue Jeans launched what it calls the next step in videoconferencing: fully interactive online video conferences at scale. It’s the only technology, the company says, that will allow you to interact with thousands of people online in real time and promote any of those thousands of audience members to active participants at any given time.

“At one end of spectrum you have meeting tools like conferencing systems,” chief commercial officer Stu Aaron told me today. “They work well, they’re great for interactivity, but they don’t scale. At the other end you have webcasting or streaming tools, which scale well, but are not very intimate.”

Primetime is intended to provide the intimacy and interaction of videoconferencing systems while retaining the scale of webcasting tools. The technology has been in field trials since September, and Blue Jeans has an all-star lineup of launch partners including TEDx, the iconic short lecture series that has swept the globe, and the Sundance Film Festival. Other partners include RedHat, Wikia, and the Wharton School of Business.

“With over 3,000 yearly events spread across 165 countries, we have TEDx organizers in every corner of the globe,” says Alex Rudloff, chief digital strategist for TEDx. “Online video is the perfect way for us to connect, and this tool’s interactivity is making it possible for us to do this in large groups like never before.” 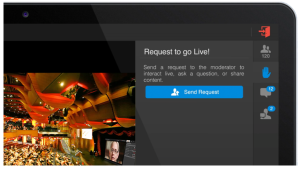 For the next few months while Primetime is in public beta, it will be free. That’s a big benefit for anyone who wants to do a major event, as Blue Jeans is charging about $3,500 for a typical one-hour, 1,000-person online event.

Blue Jeans’ previous technology scales up to about 100 users, the company told me. The new Primetime scales to thousands, but includes tools for moderators to promote any of the thousands to full contributor status, allowing them to virtually raise their hands, ask questions, interact with conference leaders, and share video from their laptops, phones, conferencing systems, or tablets.

Pricing — yes, it will eventually cost money — will be subscription-based, but you’ll also be able to buy just one event, or a block of events.

“Take a show like Dr. Phil,” Aaron says. “Let viewers actually engage in the discussion. Sports agencies can help athletes monetize some of their time … tweet out that they will be on Blue Jeans PrimeTime, where they can talk to the masses, but people can pay to be promoted into the interactive segment.”

With all this expansion of audience, Blue Jeans knows it needs more advanced functionality for moderation and safety.