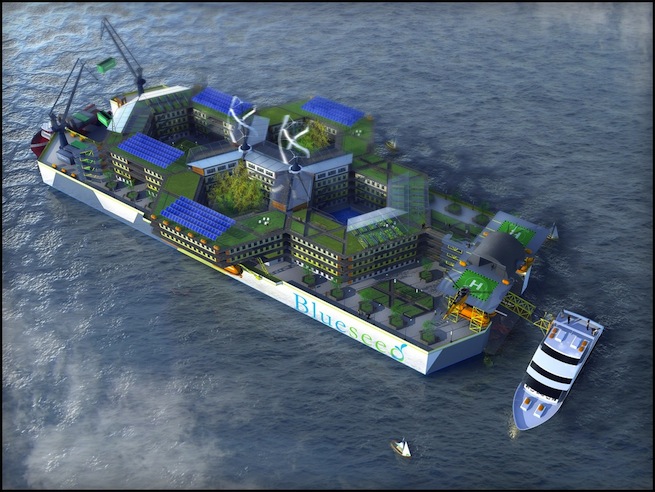 Blueseed, the startup-ship making Pirates of Silicon Valley an actual thing, has already gained interest from hundreds of entrepreneurs looking to start a company on the open sea.

Blueseed is a conceptual floating island-ship intended to house technology startup founders and employees only 30 minutes from California’s northern coast. The founders, who include an ex-Yahoo software engineer, plan to open the ship to inhabitants by the third fiscal quarter of 2013. Because the ship will be located 12 miles outside California in international waters, a visa is not needed, hopefully drawing in international entrepreneurs.

According to a survey done by BlueSeed, 133 startups are already gearing up for the maritime experience. Twenty percent of those startups come from the United States, followed by India at 10 percent and Australia with six percent. Of those 133 ready startups, 35 percent say they would be ready to move in now, if the ship was complete. Most of the startups would be ready move at least within the next six months. On average, each startup would move around four people to the ship to begin building their company.

The biggest draw is seemingly not the fact that you don’t need a visa to live and work on the ship, but rather entrepreneurs are coming for the “awesome startup and technology-oriented space.” The second most critical element for startups was the close proximity to Silicon Valley’s venture capital scene.

Rent to live on the ship is about as much as a single person living in San Francisco has to pay: around $1600 a month. That is, if you’re willing to bunk up. The price includes both living and office space, but will range from $1200 for a shared cabin, and runs up to $3000 for a “top-tier single” cabin. Ferries will shuttle entrepreneurs from the ship to Silicon Valley daily, and Blueseed says it will help those from outside the US enter. Blueseed is also looking for incubators who are interested in helping the startups. Can anyone say Y Combinator study abroad?