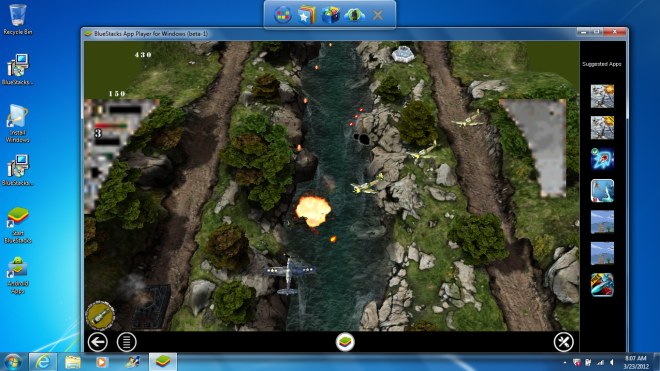 Bluestacks’ grand vision of letting you run Android apps on Windows is one step closer to reality. The company today has released a free beta version of its software, which now supports most of Android’s 450,000 apps.

The new release is a major upgrade over Bluestacks’ alpha version, which was made available for three months last year to early testers and was only able to run nine preselected Android apps. The new beta version, which supports Windows 7, Vista, and XP, gives you access to pretty much any Android app — though not all of them run very well.

Still, it’s a big step for the startup, which made waves last year when it first announced its emulation technology. Dubbed Layercake, the software emulates Android apps written for ARM processors on x86 processor-based Windows PCs. Without such emulation technology, software between the two different chip platforms is fundamentally incompatible (without being recompiled). Emulation is nothing new, but Bluestacks is the first company devoted to bringing the rich variety of Android apps to PCs.

“It’s really a whole new product,” said Bluestacks CEO Rosen Sharma in an interview with VentureBeat yesterday. The company has been working on the emulation technology for two-and-a-half years, Sharma told me, but now its original vision is finally coming into view.

While the Bluestacks software won’t appeal to everyone, it could be useful for those who want to test out Android apps, or users who want access to apps that don’t yet have desktop versions. And judging from the company’s Facebook page — which has garnered 75,000 fans within the past three days, for a total of  286,000 fans — it’s clear Bluestacks has struck a chord with a sizable audience of geeks.

I tested out the beta release over the weekend, and I was honestly surprised at how well it worked. After installing the beta — a process that took around 10 minutes — I was presented with a simple home screen with some pre-installed apps, including Fruit Ninja and Evernote. Apps can be run in a window or full-screen view, and they performed adequately on my Windows 7 PC with a quad-core CPU and 8 gigabytes of RAM (don’t judge me).

Games like Fruit Ninja and Angry Birds were playable (though the latter had choppy graphics and sound at times), and productivity apps like Evernote worked without much issue. Strangely, the new Angry Birds Space performed almost flawlessly (see the video below). 3D-heavy apps, like Google Earth, didn’t fair as well, and brought Bluestacks to a crawl.

Sharma tells me the company is constantly working on making the app faster. For 3D apps to work better, the company needs to make upgrades to hardware-accelerated graphics support, which he says are in the works.

The company has high hopes for the beta release of its software after the alpha release saw widespread engagement from users. Over a million users across more than 100 countries downloaded the alpha release and opened over 4.5 million apps.

As I wrote when the company announced its Windows 8 support, BlueStacks is poised to be especially useful on Windows 8, since it supports both traditional desktop and tablet interfaces. Tablets running the new OS will be far more appealing than those running Windows 7, so BlueStacks could win big if Windows 8 tablets take off. And given just how much Microsoft’s tablet future relies on Windows 8, there’s no reason to think that it’s going to drop the ball.

Bluestacks told me at the Consumer Electronics Show this year that it’s actively targeting Ultrabook makers to pre-load its app (it has already inked a deal with InHon, a Taiwanese manufacturer). The company’s technology is also ripe for licensing — I can just imagine how much Intel would love to use Bluestacks to power ARM-based apps in its upcoming x86-based mobile devices.

Campbell, Calif.-based BlueStacks has raised $10.6 million so far in a single round of funding.