PC gaming platform BlueStacks has launched BlueStacks Inside, which enables mobile game developers to publish their games on Steam with no porting to the PC required.

BlueStacks inside has a one-step software development kit (SDK) that lets developers take existing mobile games to Steam and Discord.

The initial launch will include several high-profile developers like KOG, Funplus, Fabled Game Studio, and many others whose games will be available directly on Steam.

Mobile developers have started allocating large budgets to game development, and that means mobile games can be competitive on Steam without a ton of modification.

With games like Lineage 2: Revolution and PlayerUnknown’s Battlegrounds, graphics and gameplay push the limits of what a mobile device can do.

On the other hand, gamers are caught in a struggle to maintain devices that can keep up with demanding games. BlueStacks Inside gives developers an opportunity to reach a much wider and valuable PC-based audience without the need to hire a separate PC development team.

Players can use their PCs to do the heavy lifting for games their phones would otherwise not be able to run well.

“What we see is that the BlueStacks and Steam audiences overlap almost completely. So the partnership gives gamers access to the entire Android gaming library right on their PCs,” says Rosen Sharma, BlueStacks CEO, in a statement. “We eliminate the need for separate development teams just to bring mobile games to a PC audience. When published with BlueStacks, a player downloading the game through Steam gets the full game experience. It isn’t BlueStacks. It isn’t Steam. It’s a PC game.” 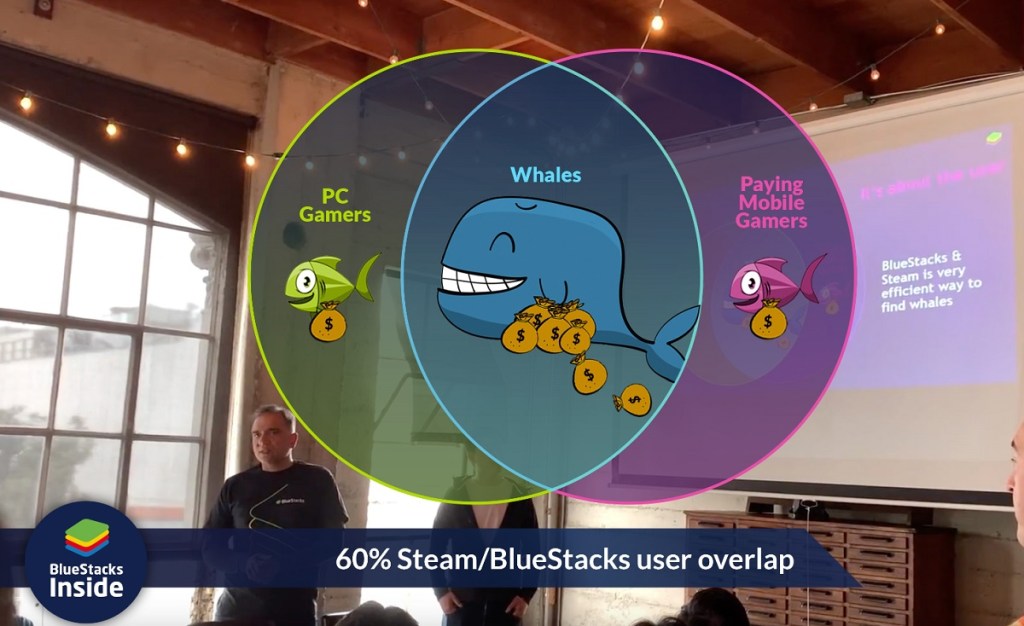 Above: BlueStacks and Steam are a fit.

BlueStacks Inside for Steam will give developers access to a spectrum of features from a simple and mandatory payments integration, replacing traditional app stores, to Steam’s Community Hub, promotions, curators, and collections. The Steam Wallet will process all in-game purchases in the same way as a traditional app store.

Developers seeking higher engagement and average revenue per user (ARPU) will find PC gamers as some of the most loyal and hardcore of any gaming cohort.

“We see a nearly 80% overlap between high-value mobile gamers and high-value PC gamers,” said Mike Peng, head of global operations at Funplus, in a statement. “Developers can not only reach more people, but the people they reach on Steam are much more likely to play the game for longer and spend more than the average mobile gamer. This is amazing news for our user acquisition team.”

BlueStacks Inside is currently in a soft launch with a few select partners.

Pirates Outlaws from Fabled Game Studio launched on Steam during the Game Developers Conference in March and is currently available in the Steam store.

Nicolas Lavergne, Game Producer at Fabled Game Studio pointed to the scale of the Steam store, with over 40 million DAU, and ease of integration, a simple SDK, as the two main reasons to launch their new title Pirates Outlaws on PC as well as through Google and iOS.

“One of the things we found exciting about publishing with BlueStacks is having the ability to connect easily their massive Steam audience without any additional development requirements,” he said. “Our players can now use the Steam platform to access player-generated guides and streamer videos which are fundamental to build a community.”

Even large mobile developers like KOG are looking to BlueStacks instead of building out PC-porting teams. Rafael Noh, vice president at KOG, said, “We want players to play on their terms. If they want to play on PC, then we want them to have the best experience. BlueStacks Inside gives us the ability to distribute the best PC experience to players on platforms they already use.”

BlueStacks launched in May 2011, and the first version of BlueStacks was released in March 2012. BlueStacks crossed 370 million users in January of 2019.