Yesterday, BMW revealed that it will introduce 40 self-driving test cars to U.S. and European roads in 2017. But until that happens, the German automotive giant announced that it will let car buyers check out some of its currently available electric and hybrid cars virtually, thanks to the powers of augmented reality (AR).

With the BMW i Visualiser, those seeking to buy a BMW i3 electric car or BMW i8 hybrid sports car can customize, configure, and walk around the vehicle of their choice, even if the dealership doesn’t have the specific car in stock. The app, powered by Google’s Tango platform, will initially be made available at a selection of BMW dealerships across the U.S., Europe, China, and Japan, though later in the year it will be available to download directly from Google Play so people can tweak the design of their i3 or i8 from home. 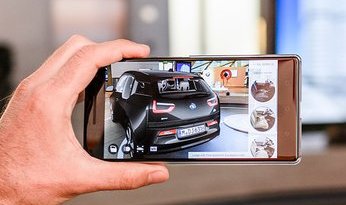 “In our initial tests, as people entered the car virtually in the app, we saw them ducking down, as if there really were a roof there for them to bang their heads on,” explained Andrea Castronovo, BMW group vice president of sales strategy and future retail. “It’s that level of detail which means this technology offers the customers real added value.”

Google’s Tango platform uses computer vision to allow mobile devices to be location-aware relative to their surroundings — without relying on external systems, such as GPS. This is useful for indoor navigation and 3D mapping and can enable some interesting commercial use-cases, as we’re seeing with BMW. There are only a handful of devices on the market that support Google Tango, including the Lenovo Phab 2 Pro and the Asus ZenFone A, which was announced yesterday, though it won’t be available to buy until Q2 2017.